Ex-Hearts boss in negotiations with club over unfair dismissal 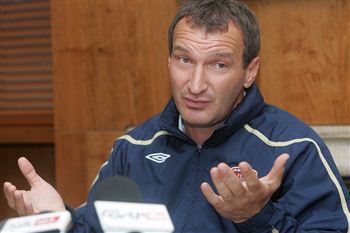 aba Laszlo is locked in legal talks with his old club, after an employment tribunal due to begin today (Tue) was postponed.

Mr Laszlo, 46, was to launch a legal battle over unfair dismissal and a breach of contract, which led to the termination of his job earlier this year.

The hearing was set to last four days – with the ex-boss expected to give evidence in person – but has been put on hold while lawyers from both sides look to resolve the issue.

They are said to be using an external source to come to an agreement – which will likely see Mr Laszlo being offered a compensation sum to settle the matter.

However, when Mr Laszlo lodged the complaint in March this year, a spokesman for the Edinburgh side said they had every right to sack him and would see the employment tribunal through.

The Hungarian was sacked by Hearts on January 29 this year – before being replaced by former boss Jim Jefferies – but still had 18 months left on his contract and is suing the club for an alleged unfair dismissal.

‘Manager of the Year’

He was in charge of the football team for 18 months, making him the longest serving coach under current club owner Vladimir Romanov.

When he started at Tynecastle, Mr Laszlo led the team to third place in the Scottish Premier League (SPL), while they also qualified for the Europa League.

He was named Manager of the Year for the 2008/09 season by the SPL and by the Scottish Football Writers’ Association.

He also picked up the Manager of the Year title in his homeland Hungary, during the 2003/04 season.

But – after speculation about disagreements over tactics, signing priorities, and managerial ambitions – his reign came to an end.

One month after the controversial sacking, the manager spoke out about taking legal action against the club.

He told reporters: “When I spoke to Romanov, he briefly told me he was terminating my contract.

“He didn’t even give a reason. No justification, he said he didn’t have to.

“My contract was completely clear.

“I have instructed my lawyer to look at it and it’s clear my contract has been broken.

“It is specified on it that if they break the deal, they will have financial obligations imposed.

“I wanted to keep my private contract details to myself.

“I refused to speak to journalists because I expected the club to honour their commitments.

“But that did not happen and, in the last few days, I have had to take the matter further.”

The hearing has been postponed for up to four weeks, while both sides try to negotiate the terms of a settlement.

The employment tribunal service is waiting to hear from the Advisory, Conciliation and Arbitration Service (ACAS) to see if an agreement can be made between the two sides.

But Heart of Midlothian Football Club refused to give any comment on the matter, saying that it was “between legal professionals now”.

Mr Laszlo’s latest legal endeavor comes only a few months after he gave evidence at another tribunal when a football secretary set out to sue the club for sex discrimination.

Louise Mackenzie claimed she had a right to work match days and relied on the extra cash it brought in.

She also said that another secretary brought in to cover her days off after she went part time was given special treatment when it came to the weekend shifts.

Mr Laszlo gave evidence to say that he had demanded seven day cover by a secretary, which led to the club taking on a second employee.

At the time he described himself as “unemployed” and had to leave the tribunal early to pick up his kids from their Edinburgh school.

Ms Mackenzie’s claim was lost as the tribunal ruled in favour of the club.

Mr Laszlo played central midfield until a knee injury forced him to retire when he was just 27.

He has been reported as saying he wants to find another managerial position in Scotland as his family is now settled here.

Prior to joining Hearts in July 2008 he was national boss of Uganda where local media dubbed him the ‘Miracle Man’ after he led the side from 167th in the Fife rankings to 91.