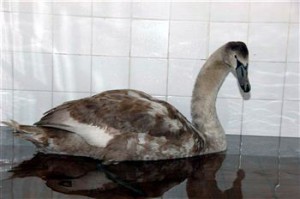 ScotRail driver Bob McFarlane, 50, rescued the disorientated cygnet after it crash landed as his Fife circle train approached Rosyth Station on its way to Edinburgh.

And the Scottish Society for the Prevention of Cruelty to Animals (SPCA) has hailed the driver for everything he has done.

Mr McFarlane, from Wiston, near Biggar, said: “As I reached the station, passengers on the platform were pointing frantically at a swan lying on the tracks ahead of my train.

“It would have been impossible to stop but thankfully the swan moved out of the way and onto the opposite tracks.

“I spoke to the signaller because I knew swans are a protected species and he was amazed when I told him that if he could ensure no trains would pass the opposite way then I’d try to rescue the bird.

“I climbed down and waded through snow which was up to my knees before picking the swan up and carrying it into the train. I know they can give a nasty bite and have been known to break people’s arms but I couldn’t just leave it there.”

But Mr McFarlane didn’t just save the swan, he ensured his passenger travelled as a VIP.

He added: “The first class section of the train was empty so I blocked it off and that’s where the swan stayed until we arrived at Waverley station.

“It was just after five o’clock when we got there so the concourse was absolutely packed.

“When they spotted us, passengers couldn’t help smiling and there were a few shouts of ‘there’s Rod Hull and Emu!’.

“I was just happy to help and I’m delighted to hear the swan is going to be okay.”

He said: “Bob did remarkably well to rescue the swan, which will probably have become disorientated because of the weather.

“It will have crash landed and wouldn’t have realised it was on train tracks because of the snow.

“It was very quiet and dazed but is now able to stand and will be released in the next few days.”