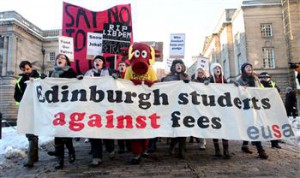 HUNDREDS of angry students launched an attack on the Liberal Democrats and Nick Clegg today (Wed) as they protested in Edinburgh against the rise in tuition fees in England and education cuts.

She said: “We are marching to show our Scottish MPs that we expect them to vote against increased tuition fees in England.

“Tuition fee increases in England will be disastrous for students in Scotland. Fees of up to £9000 in England will create a huge funding gap and Scottish institutions will struggle to compete with their wealthier counterparts south of the border.

“We are here today to tell the Government that education should be accessible to all regardless of your bank balance.

“We are here today because we believe that education is a right and not a privilege.”

Miss Rawlings also spoke about the Liberal Democrat MPs who signed a pledge promising to vote against fees before the General Election.

She added: “We will not forget. The student movement is stronger than ever. We are mobilising people faster than ever. This is just the beginning.”

Students were not hampered by the icy conditions and freezing cold temperatures as they chanted to the sound of bongo drums and tambourines down the streets of Edinburgh.

They carried an array of banners including ‘Gonnae no dae that, just gonnae no’, ‘Vote our way or pay in May’ and ‘Snow joke’.

Students also launched an attack on Edinburgh Lib Dem MP Mike Crockart who has said that he would vote against raising tuition fees.

Hamish Kallin, 22, a Geography student at the University of Edinburgh, said: “It’s a severe perversion of democracy to promise something to a specific democratic group and just lie about so I think it’s pretty bad.”

And it wasn’t just current students who turned out in force but graduates too.

“I think that there are alternative ways to deal with the deficit.”

Liam Burns, president of the National Union of Students’ Scotland also took the megaphone. He said: “This is a fantastic turnout and let me tell you that you are joined by thousands of students all across Scotland who have taken action today.

“Before the General Election we were given an explicit promise. Every single Liberal Democrat MP’s signed a pledge to say ‘I will vote against any increase in tuition fees.’

“That was a personal promise, not just a manifesto pledge and people cannot throw that away at the first sign of compromise.

“It goes further because at the end of the day how dare any MPs turn round and tell us to engage in politics when we respond to their elective promise, we turn up at the ballot box and they throw it back in our face.”

Labour MSP Sarah Boyack, Green MSP Robin Harper and Lib Dem MSP Mike Pringle turned out to show their support for the students along with Iain Macwhirter, rector of the University of Edinburgh.

Other marches took place in Glasgow and Stirling along with others throughout the UK.

If MPs vote in favour of raising the tuition fee cap it will take effect from September 2012.