The big brother of Andy accidentally killed a bird during a practice session at the Australian Open.

The unfortunate baby sparrow did not survive coming into contact with a tennis ball that rocketed off the 24-year-old’s racket.

His mother, Judy (below), Tweeted: “Jamie’s serve bigger than he thought.”

Finishing her message with sad smiley, she explained: “Just killed a bird (feathered variety) out on court 17.”

The freak accident overshadowed Andy’s win over Karol Beck from Slovakia, which put him in to the second round.

The world No.5 told reporters: “It’s pretty traumatic. I think he hit a sparrow. A baby sparrow, this morning when he was practicing with a serve. I think he killed it.”

He added: “My mum told me about it when I woke up this morning.

“I hope he didn’t do it on purpose. I haven’t seen him yet today. It was a pretty traumatic start to the day.”

Jamie is playing doubles at the Australian Open with Xavier Malisse, from Belgium. 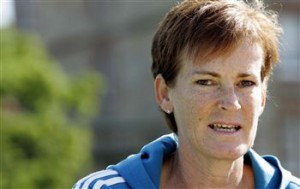