December was the cruellest month for Scotland’s parking enforcers 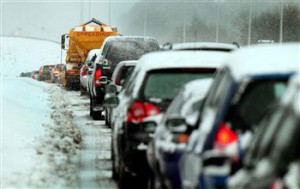 New figures show that at least 11,800 fewer parking tickets were given out in December 2010 than in the previous year.

And Stirling and Angus Council’s did not issue a single ticket in December because of the snow.

With the average parking ticket costing between £50 and £60 this equates to a possible loss of over £600,000 for Scotland’s cash-strapped councils.

December 2010 was officially the coldest month for more than 300 years and motorists bared the brunt of the bad weather with even the busy M8 closed.

In towns and cities drivers were forced to abandon their cars because of the extreme conditions.

And local authorities assured that they would not give out tickets if road markings were not clearly visible.

Figures obtained through a Freedom of Information request showed that all councils saw a drop in figures from December 2010 and the same month the previous year.

But in Falkirk there wasn’t much change to the normal day with 50 tickets being given out in December 2010 compared to 69 in 2009.

And Edinburgh Council still maintained a high figure of 8,986 tickets being given out – around 50% less than the previous year.

A spokeswoman for Stirling Council, said: “The reason we gave out no tickets was because of the weather.

“The parking attendants couldn’t issue tickets if they couldn’t see the lines.

“We only issue parking tickets for our own council-owned car parks. The rest are given out by Central Scotland Police.”

A spokeswoman for Angus Council said that the reason for giving out no parking tickets in December last year was “purely down to the snow.”

She added: “It was down to the level of snow and ice coating the car parks.

“The lines were completely obliterated so no fines were imposed.

“In Angus our car parks are free anyway and people would only get fined for things like staggering two bays.”

A spokesman for Falkirk Council said: “Throughout the winter we were well aware of the problems with snow obscuring parking bays and we did not issue any tickets for these vehicles.

“Consequently we can’t see any reason why the figures have shown a small decrease from the previous year.

“Tickets are issued for other reasons such as the time period has run out or displaying no ticket at all.”

Gary Webb from NSL, who provide parking attendants for Edinburgh City Council, said: “The severe weather in December affected deployment on a number of days. However, we worked closely with the council and our health and safety representatives, and assessed deployment continually throughout this difficult period.

“Though we issued less Penalty Charge Notices than in 2009 the attendants deployed advised the public, and ensured we could play our part in keeping the streets of Edinburgh moving.”