Guinea World Record: Rosyth rodent leaps where no pig has gone before 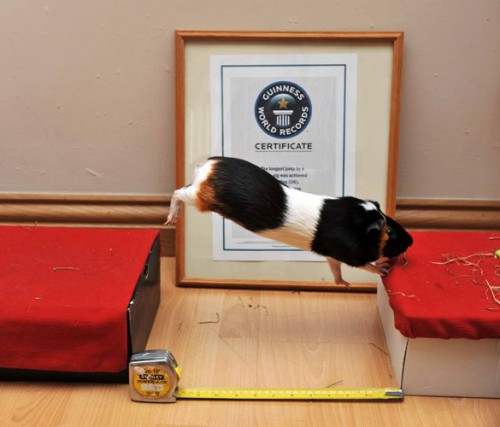 A SCOTS guinea pig has leapt to fame after breaking the world record for the longest jump for his species ever recorded.

Truffles jumped into the Guiness Book of Records after his owners were inspired by a Disney movie to train him.

The rodent, who was bought for £5, smashed the previous world record by 10cm. Now Chloe, from Rosyth, Fife, is training up another Guinea pig, Nibbles, for an assault on the world sprint record.

Chloe’s mum Angela, 42, said her daughter came across the previous record – set by London guinea pig Diesel in 2009 of 20.5cm – and tested out whether Truffles could jump the distance.

She said: “The girls saw G-Force and they loved it, but they thought their guinea pig could do better.

“Chloe trained it to jump between two shoe boxes and eventually got it to 30cm.”

“So now he’s better than G-Force!”

After testing his jumping abilities Chloe, along with sister Nicole, 14 and dad Gordon, 44, got in touch with Guiness World records who assigned Truffles his own ‘talent manager’ for the big jump.

Cameras were used to record the jump, and despite the pressure Truffles reached a distance of 30cm easily.

Angela said: “I never thought I’d ever have a world champion in my house!

“It was a great night – you should’ve seen the faces of the Scouts – and my dad, John, was the proud granddad, parading around with Truffles.

“It was absolutely lovely and the girls were delighted.”

Chloe, a pupil at Inverkeithing High, said her pet’s biggest-ever jump was 32cm although it did not count for record because it was not independently witnessed.

He said: “At school a lot of my friends have pets and I have always been jealous of them because I only had a guinea pig. But now they are jealous of me because I have a world record breaking guinea pig.”

Talking about her training regime for Truffles, she added: “I had two shoe boxes and these cushions between them for safety. We kept moving the shoe boxes further and further apart. We started at around 15cm and he was quite good. He got to 20 and then 25cm very quickly, within a few weeks.”

Truffles now has a framed certificate to prove his jumping abilities, and has been promised a starring role in the publicity for the 2013 Guiness Book of Records.

As well as earning her guinea pig fame, Chloe has been awarded a Scouting community event badge.

She said: “There’s other records out there, there’s the high jump and fastest sprint so they could try that.

“Nibbles doesn’t jump but he does run. Though we haven’t timed him yet.

“[Chloe and Nicole are] absolutely delighted, they can’t believe so many people are interested in their story.”