ROYAL Mail is to release a special commemorative sheet of stamps to mark the centenary of the Titanic’s tragic maiden voyage.

The sheet will be issued on 10 April, the day RMS Titanic set sail from Southampton to New York, and will comprise of 10 1st class stamps featuring a red Royalty Seal.

Then the world’s largest passenger liner, RMS Titanic was built at the world famous Harland and Wolff shipyard in Belfast and was regarded as unsinkable. 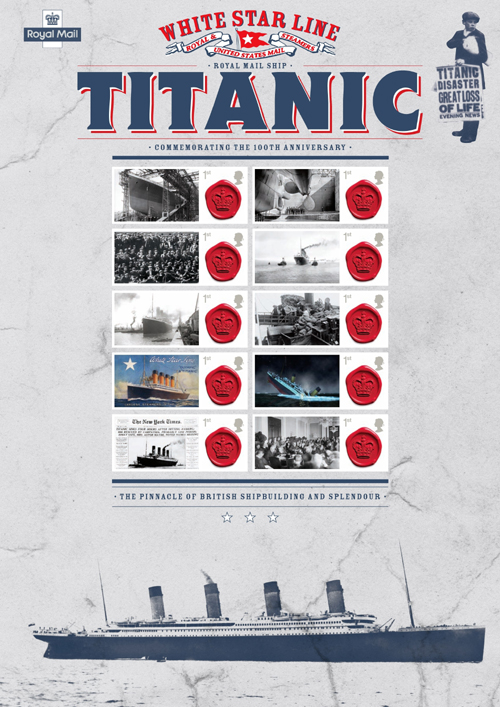 The Titanic’s voyage began with her departure from Southampton at noon on 10 April 1912. She stopped at Cherbourg in France to pick up more passengers and mail before journeying through the night to Queenstown (Cobh) in Ireland.

There the Titanic picked up the last of the passengers and a further 1,385 sacks of mail, before setting off across the Atlantic early in the afternoon on 11 April.

However, four days into its historic journey and with 2,223 passengers on board, it hit an iceberg and sank within three hours.

Five postal clerks were among the 1,500 people who perished. Two British postal clerks, James Bertram Williamson and John Richard Jago Smith, based in Southampton, were working in the doomed ship’s mail area along with three American postal staff.

The five men would have been kept busy sorting both the mail loaded on board and also letters posted by passengers in the Titanic’s own post boxes. 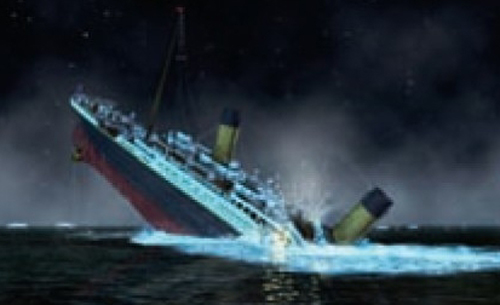 The Titanic’s mail area was deep down in the ship on two deck levels. The mail was stacked along with first class luggage on the lower level and sorted just above on G deck. These two levels were connected by a companionway which continued up to F deck. When the Titanic struck the iceberg, the lower mail area was one of the first places to flood.

A report carried in The Times a few days after the disaster stated “All five completely disregarded their own safety when the vessel struck and began to carry the 200 sacks of registered mail to the upper deck. The report continues:  “As the situation became more desperate they appealed to the stewards to assist them and continued their work to the last. All were lost.”

A further quote from ship Steward Albert Theissinger, one of the 705 who survived the disaster says: “I urged them to leave their work. They shook their heads and continued at their work. It might have been an inrush of water later that cut off their escape, or it may have been the explosion. I saw them no more.”

The bodies of the five postal workers were never recovered – nor was any of the mail aboard the Titanic.

Philip Parker, Royal Mail stamps spokesperson said: “The history of the Titanic and Royal Mail are closely interlinked, as the ship was commissioned to carry mail and so the letters RMS (Royal Mail Ship) were used in the ship’s name.

“As we mark the 100th anniversary of its maiden voyage, we hope that this Titanic Commemorative Sheet and the 10 images which accompany the stamps, will act as a poignant reminder of the incredible Titanic story which has been indelibly etched into our history.”