WHILE celebrity chefs across Britain have spent recent years on a mission to make cooking more accessible, it appears youngsters still have a way to go when cooking the basic stuff.

According to new research nearly a quarter (22%) of 16-24s who have eaten pasta in the past year agree that it is difficult to cook pasta to the correct texture. 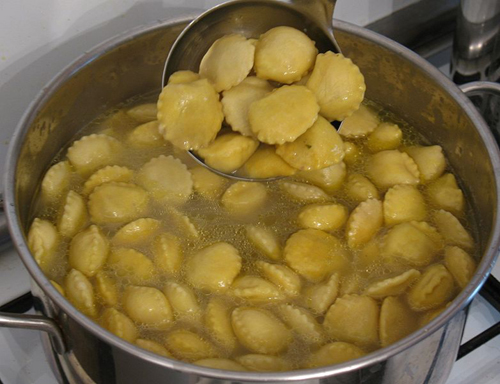 The use of microwaveable rice as a ‘sure to succeed’ alternative remains hampered by the 52% of rice users seeing it as failing to match dry rice on taste.

And it is Londoners who have the most difficulty in cooking pasta – 18% of Londoners agree that it is difficult to cook to the correct texture – this compares to just 8% from the North East and Scotland.

However, when it comes to rice this is all change – as 35% in the East and West Midlands have difficulty, falling to 17% in the South East and East Anglia – Londoners seem to fare better with rice as 20% claim to have difficulty.

Alex Beckett, Senior Food Analyst at Mintel, which carried out the research, said:“It appears that the efforts of some of Britain’s best loved chefs to make cooking easier and more accessible have gone rather off the boil. Indeed, it seems that this lack of confidence in being able to cook has resulted in an added cost being passed on, as consumers stump up for pricier chilled pasta as an easier option.

“That one in four rice users find it difficult to prepare rice properly is a likely barrier to more frequent usage of cheaper, dry rice. Knowing the basics of cooking from scratch rather than tearing open a pre-prepared packet could help young people improve their health as well as their bank balance.”

The lack of culinary skills among younger consumers contrast with the know-how of Britain’s older generation. Just 9% of rice users aged over-65 admit they find it hard to cook rice compared with 37% of 16-24s.

And over-55s are the least likely age group to admit pasta is difficult to cook, with just 4% of consumers in the age group claiming to think so, as opposed to 22% of 16-24s.

“Britain’s more mature generations appear to be the most confident in the kitchen, suggesting our growing reliance on quick-fix foods is to the detriment of basic cooking skills. Television networks are crammed with cookery shows but their main aim is to entertain rather than educate.” Alex continued.

The pasta and rice markets have benefited since recession as being an affordable meal solution – with 49% sales growth recorded for pasta 2006-11 and 26% for rice in the same period. Meanwhile, price hikes may have hit the pasta category in 2011, but a massive 86% of users agree pasta is still a cheap meal solution, reflected in its resilience even as household budgets have come under pressure.

And when it comes to rice, the price inflation that has hit the market has been noted by nearly half (48%) of users, however, it has retained an image as a cheap meal accompaniment (80%), supporting demand throughout the recession and in its aftermath. Rice is deemed a healthy and nutritious meal by eight in ten (78%), putting the market in a strong position, but only 30% of users are convinced that rice is healthier than pasta and potatoes.

Reflecting the “curry culture” in Britain, Basmati top the list of Britain’s favourite rice, with 69% of Brits eating it. Long grain (63%), Microwavable (40%), Savoury (28%) and Wholegrain/Brown (27%) make up the remaining top five. However, Wholegrain rice – was worth half a million in value in 2010 – but this has fallen to just £300,000 in 2011, despite a rising public profile of its health benefits. Thai/Jasmine (13%) and Arborio/risotto (17%) are lower down the consumer shopping list.

“That Britons are prepared to pay out for better-quality rice bodes well for future growth in the market, considering commodity inflation is unlikely to disappear. This also seems to signal an awareness of the differences in rice varieties, suggesting that the majority see it as more than a basic commodity, indicating potential for growth through added value. However, uptake of the likes of Thai and risotto rice remains low, suggesting the need to further communicate how the rice variety used affects the cooking results.” Alex concluded.

Finally the fail safe companion of the lazy cook – the instant noodles sector has certainly been capitalising on demand. Indeed, the sector increased 10% in sales value over 2010/11 to reach £190 million – and up 3% in volume.