TRAM workers have been accused of turning Princes Street into a £1bn private car park.

Fenced-off areas of the famous street are used by as many as eight tram works staff as free parking for their cars, infuriating local businesses.

Just yards away, motorists who have suffered years of inconvenience because of the works are forced to fork out £2.80 an hour for on-street parking or £19-a-day in a private, multi-storey car park. 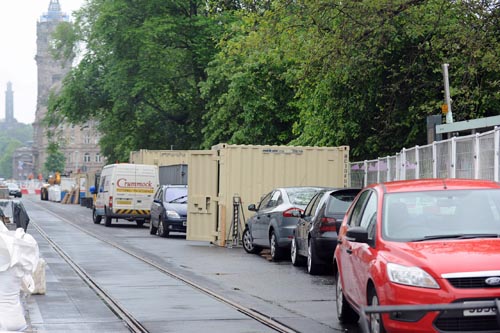 Local businesses have branded the situation “a disgrace” and called for an investigation into the practice.

Grant McKeeman, who runs a printing shop nearby, said: “This is both a shambles and a disgrace.

“There was enough of a problem with parking around the city centre before the tram works began.

“Many small businesses are suffering as a result and for these contractors to get free parking is a joke. I would hope the council sorts this out.”

Others called for an inquiry into the practice.

Patrice McHenry, secretary of the George Street Association and who works at jewellers Hamilton & Inches, said: “Given George Street is the most ticketed street in Scotland, I would ask why these contractors’ cars are parked there. This matter should be investigated.”

One commuter, who passes the “car park” daily while travelling on the bus, said the situation began a few weeks ago.

Dave Ford said: “This free car parking area started off a couple of weeks ago with maybe two or three cars parked per day. I now count five to seven cars parked there each day.

“I’d like to park for free instead of getting the bus to George Street, as I’m sure many other city centre workers [would].”

Local councillor Joanna Mowatt said that in light of the controversy surrounding the project, contractors should be more careful about attracting negative publicity.

The tram works themselves have become a national laughing stock, with costs escalating to £1bn, cutbacks to the route, and horrendous traffic jams.

“I can understand the frustration of commuters and traders that these contractors seem to be gaining free city centre parking,” she said.

“The project needs to be whiter than white given its long-running mismanagement and this situation doesn’t help.”

Graham Birse, deputy chief executive of Edinburgh Chamber of Commerce, said the council was aware of the issue.

He said: “This issue has been raised in the past at meetings regarding the tram works and the council had promised to be vigilant on the matter. The issue of a particular contractor using the compound when needed is not an issue but the dumping of half a dozen cars is unacceptable.”

Council transport leader Lesley Hinds said: “Any vehicles parked within the site compound should have a legitimate reason to be there and we have asked the contractor to ensure that this is the case.”

New parking controls to be introduced across Edinburgh