SCOTLAND’S most remote islands are at the centre of a bitter legal battle between a charity and a local authority.

Western Isles Council wants to produce merchandise related to the deserted islands of St Kilda, which were evacuated in 1930, to capitalise on interest on interest the picturesque archipelago.

But National Trust for Scotland (NTS), which owns the islands, has begun legal proceedings to stop them, saying it would set a “precedent” for others to make money from their property. 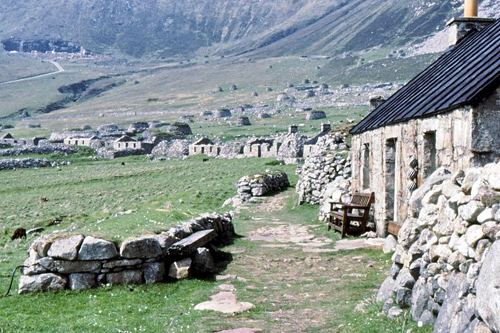 St Kilda, which lies 40 miles north west of the Hebridean island of North Uist, falls under the council’s administrative control.

The council, known as the Comhairle nan Eilean Siar in Gaelic, wants to make or licence a range of products, including books, clothing and even opera productions, relating to the Unesco world heritage site.

Holding the rights to the name would also give them power to charge for any island-related products and give them EU-wide rights over products as diverse as computer software and restraint names.

But after an appeal was rejected by the OHIM, the NTS has taken the battle to stop the council cashing in on the name as far as the European Courts.

They say it is “logical” that as they own the islands they should own the accompanying trademarks and say that if the council will others could “commercially exploit” their other properties.

A spokeswoman for the Edinburgh-based charity said: “The Trust has appealed this decision [by the OHIM] to the European Court of First Instance. Since St Kilda is owned and cared for by the NTS it seems logical any trademarks would be too.

“The Trust is also concerned that this decision could have the potential to set a precedent in relation to many other iconic places in our care, which are important to all Scots, meaning that individuals or bodies who do not own the properties involved would have the exclusive rights to commercially exploit that name. Given that the Trust is a charity, this would be far from ideal.”

The charity has lodged teddy bears, fleeces, towels and guidebooks as part of their defence, as well as submitting their title deeds for the islands.

The OHIM threw out their appeal and ordered them to pay £1,600 costs because it said the NTS had made no effort to register the trademarks themselves and protect their interests.

“On the one hand, you can see the point of the NTS – they own the place surely they have the right. But the OHIM makes the distinction that just because you own the property you don’t necessarily own the name.

“It’s a unique case and with the appeal the case could not be settled for another two or three years. It’s not impossible to register geographic place names for certain goods or services but just because you register it, it doesn’t give you a monopoly right over everything. Hollywood is registered for chewing gum, while Mont Blanc is registered for pens and stationary.”

A spokesman for Western Isles Council said: “The St Kilda name and story generates resonance and interest at an international level. The Comhairle’s ownership of the trademarks presents an opportunity to maximise the quality and consistency of the branding and messaging associated with St Kilda to a world-wide audience, for the benefit of the Outer Hebrides.”

The Marquess of Bute gifted the islands to the NTS in 1956. The last resident left the island in 1930, following years of decline and the island is not famous for its seabird colonies.