CLAIMS a Scottish parking warden slapped a ticket on the windscreen on the world’s most famous crime-busting car were today exposed as a publicity stunt.

It was reported that TV star David Hasselhoff was livid after a £60 fine was stuck on KITT, the legendary talking car from the series Knight Rider, while it was parked in Edinburgh.

Hasselhoff – known as The Hoff – is starring in a show at the Fringe and the organisers have now admitted it was a stunt. 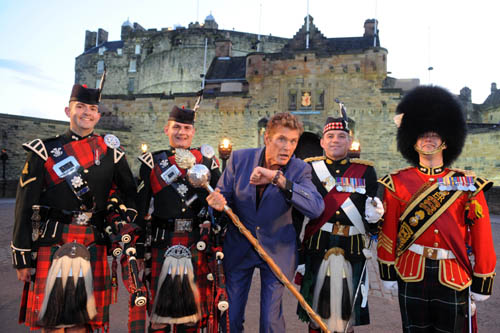 The ticket was supposed to have been handed out on Monday when KITT was parked in the city centre while Hasselhoff took part in a Fringe publicity shoot.

A photograph showed a white-haired man in dark clothes and a high-visibility vest apparently putting a ticket on the windscreen of the supercar.

The parking enforcer is said to have told onlookers: “I don’t care who he is.”

But Lothian and Borders Police, Edinburgh Council and Edinburgh University – the owners of the land – all flatly denied persecuting KITT.

Today a spokeswoman for The Pleasance, where “An Evening With David Hasselhoff” is being staged, admitted: “Yes, it was all done for a joke.”

The spokeswoman said any further details would have to come from Hasselhoff’s publicist, Paul Sullivan, who was not available for comment.

Following the fake ticket, Hasselhoff, 60, told journalists: “KITT was so upset he got a ticket.

“In fact, I had to talk to him. I had a counsellor come in.

“But he was very upset. KITT’s never got a ticket before, usually when he sees the police coming he drives away.”