A HEROIC Scots postie has been praised by rescue services after she saved a pensioner who had fallen into a fast-flowing river.

Lyndsey Holt, from Invermoriston in the Highlands, came to the rescue of the 71-year-old tourist after he fell into the River Moriston near Loch Ness on Thursday afternoon.

The pensioner, from Australia, plunged 15ft into the icy water and was swept over rapids and into a deep pool with steep, rocky sides. 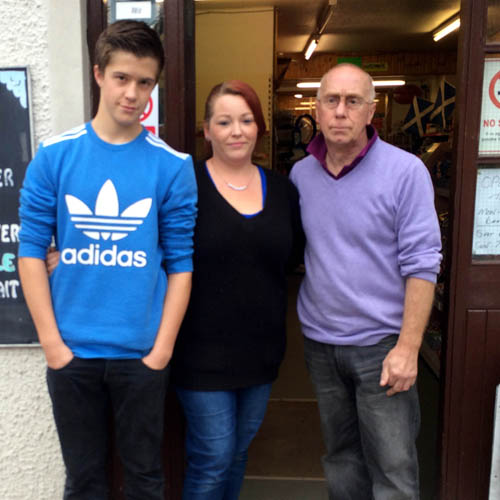 After his wife managed to alert staff at nearby Glenmoriston Stores, local postie Lyndsey, her dad Frank and 14-year-old nephew Lewis Eastment immediately ran to his aid.

Lyndsey said: “I didn’t even think about it – I was just finishing off my shift and heard someone was in trouble.”

While her father went back for rope, Lyndsey made her way down as far as she could towards the stranded pensioner.

The 30-year-old said: “I think I got down about 15ft of a pretty big drop by cambering down the rocks.

“I just know it was quite steep and then there was a big drop to the water if I went any farther.

“My father made a loop at the end of the rope, tied the other end to a tree and threw it down to me.

“I managed to work the loop first through one of the man’s arms and then over his head and under the other arm.

“It was then just a case of holding him so that he did not float away.

She added: “I just kept talking to the man and comforting him and saying help was coming.

“He told me he was passing through while on holiday from Australia.

“I was a bit worried when he said he was feeling tired and very cold, but then the paramedics from the village arrived and the firefighters weren’t long after that.

Dad Frank said: “He had gone down white-water rapids used for canoeing and had come out the other end and was hanging on to rocks.

“We ran back to the store and got the rope.

“Lyndsey climbed down the rocks and managed to secure the rope around him and then all we could do was wait for the emergency services to arrive.”

21 firefighters from Fort Augustus, Inverness and Fort William worked together to rescue the man, thought to be called Peter, after the alarm was raised just after 1pm.

The tourist is now recovering at Raigmore Hospital in Inverness.

Emergency services were quick to praise the brave actions of Lyndsey and her family.

Derek Wilkie, Scottish Fire and Rescue’s incident commander, said: “He had been swept into an area which was very difficult to access and there was a 15 metre sheer drop right beside him.

“The members of the public should be praised for their initial actions by providing him with a rope.

“Once we got there we made sure the area was safe upstream as well as downstream in case anyone else fell in.

“Our crew from Fort Augustus and the Water Rescue team were then able to properly secure the man and safely recover him from the water.

“We also contacted Scottish and Southern Energy and asked them if they could control the dam system and prevent as much water being released into the area, which really helped and ensured the water levels did not rise any further.”

He added: “This incident was an excellent example of good partnership working, with assistance from quick thinking members of the public.”

But postie Lyndsey is modest about her actions – and says she would do it again in a heartbeat.

She said: “Somebody had fallen in the water and it was just a case of finding him as quickly as possible and getting him out.

“It wasn’t till later on that I sat and thought about it.

“I don’t need thanks – I would do it again tomorrow.”