A MUM has arranged a Still Game cake for her son’s 17th including the heartfelt message: “Happy Birthday ya wee b*****d.”

Sarah Inglis commissioned the hilarious cake from a friend to surprise her son, Ross on his 17th birthday yesterday.

The teenager from Sheffield, South Yorks, is a massive fan of the comedy after being introduced to the series by his Scots granddad when he was just 11. 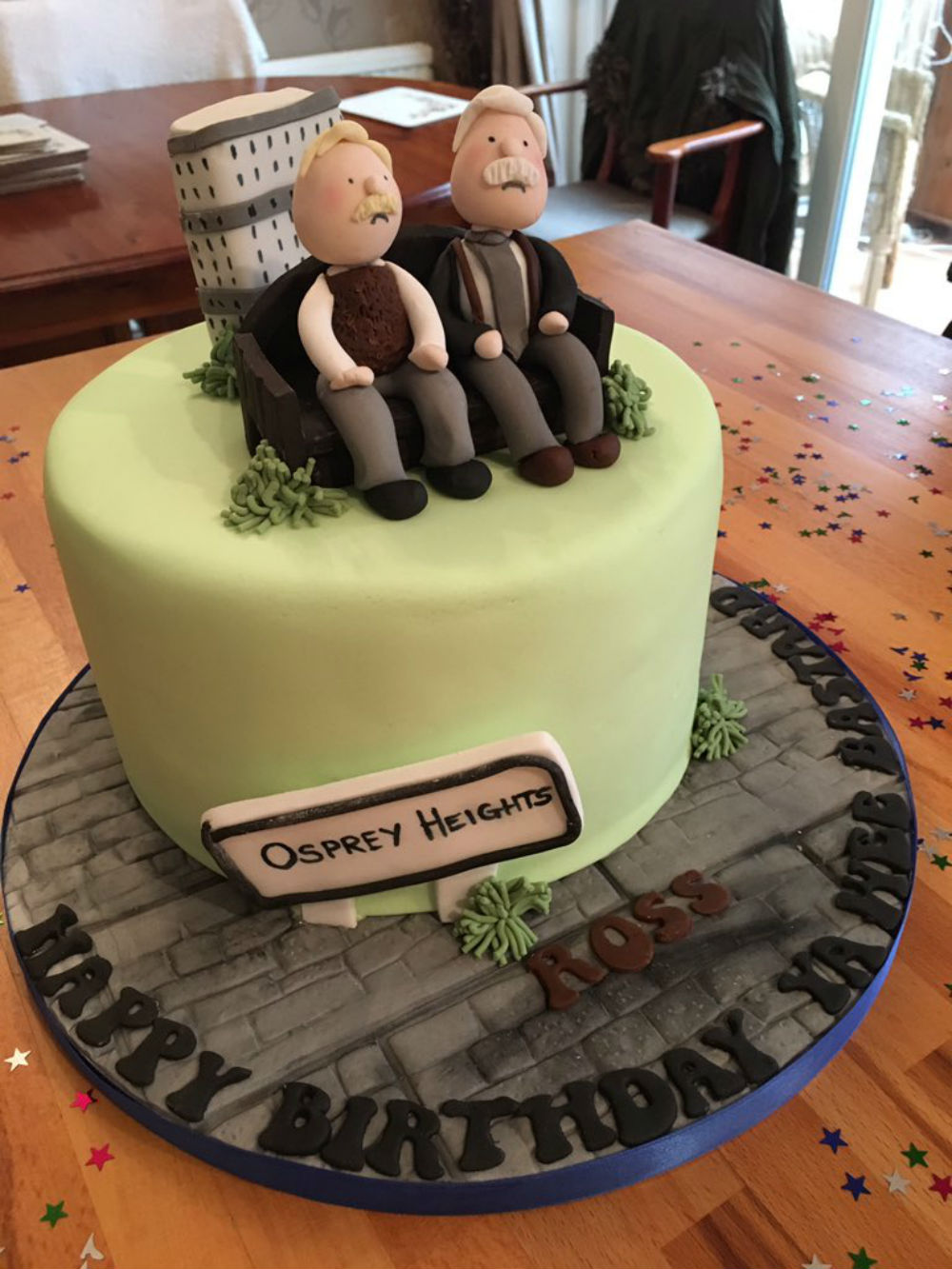 The unique cake shows iced figurines of comedy duo, Jack and Victor sitting side-by-side on a bench in the centre of the circular green icing.

Hilariously the cakemaker, Katie Gilbert accessorised the cake with the pairs fictional tower block flat, Osprey Heights, in the background.

Written on a circular base around the cake in black icing, Sarah’s hilarious birthday message to Ross reads: “Happy Birthday ya wee b*****d”. 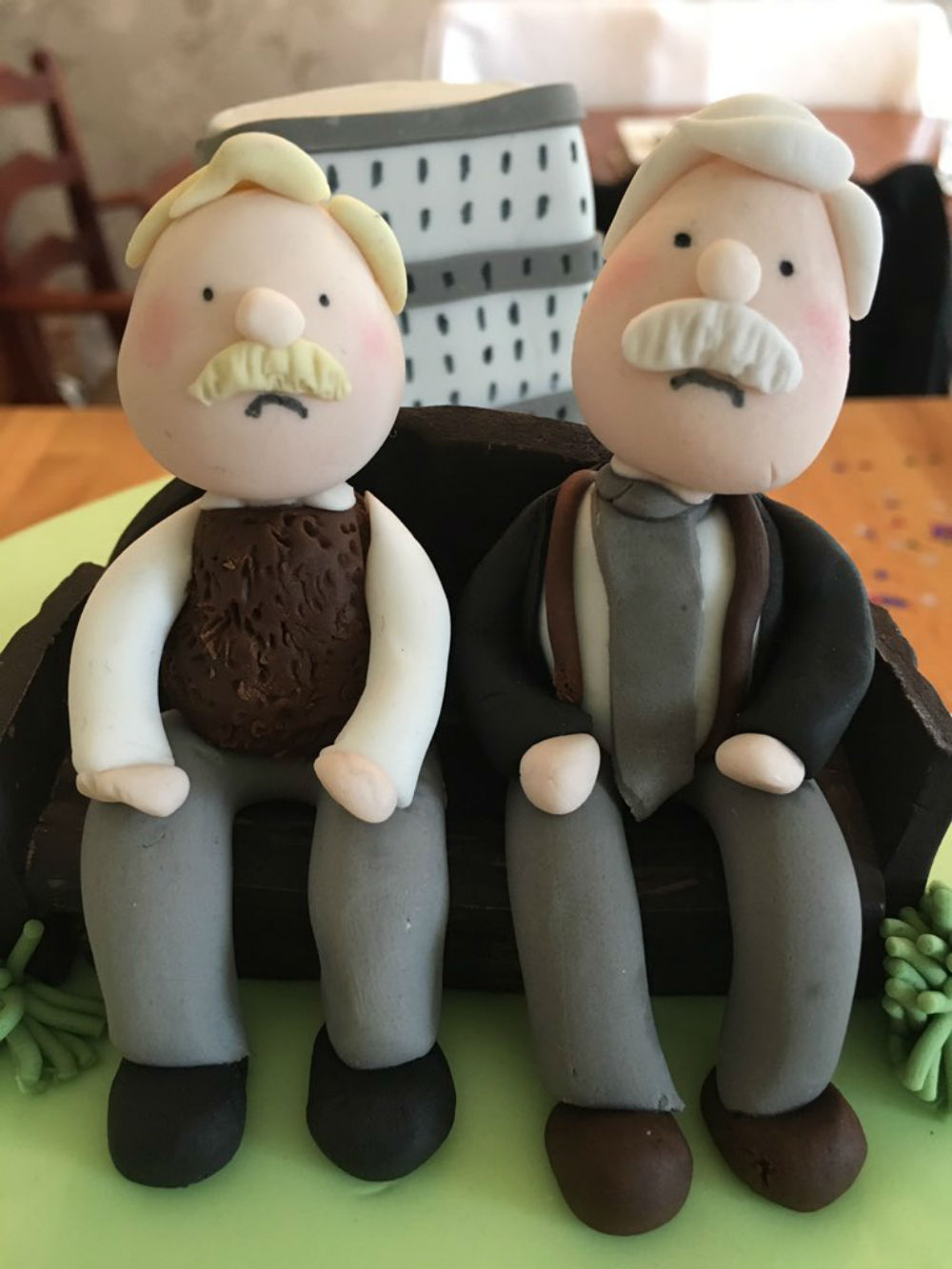 And Ford Kiernan who plays Jack on the hit TV series has even shown his approval by retweeting an image of the cake this morning.

Speaking today, Sarah said: “Ross was just so impressed when he seen it. We always try to come up with something good for his birthday cakes and he’s been a massive Still Game fan from about the age of 11.

“My husbands Scottish and moved here when he was four so Ross’ grandpa loves all the shows like Chewing the Fat and Still Game.

“They would all sit and watch them together so we got Ross a box set and since then he just loved the show and travelled up to the Hydro when they were performing live.

“He loves the show so I asked one of the mums who makes cakes to make this for him so sent Katie some photographs of Jack and Victor and the flats and then said you have to put the “Happy Birthday ya wee bastard” round the bottom as that’s what Jack and Victor would’ve said themselves. 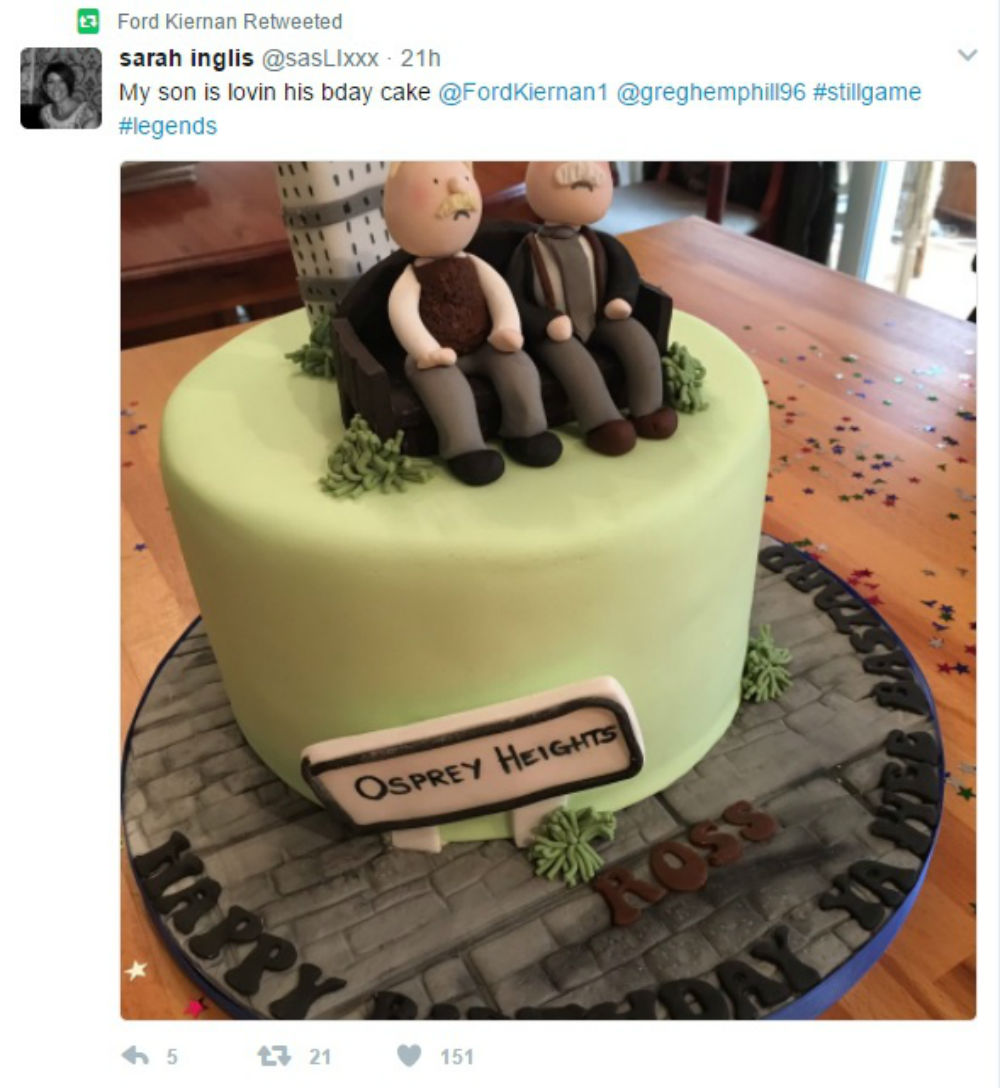 “I sent it to a Still Game fan page and it just went mad after that. Ross was absolutely over the moon but what really made his birthday was when Ford retweeted the photo and Greg liked it. That just completely made his day.”

A photograph of the cake on the Still Game fan page has already attracting over 5,000 likes in less than 24 hours.

Hundreds of fans left messages saying how impressed they were by the celebratory creation.
Shiona Robertson said: “Wow, just wow. I love it, though I wouldn’t have the heart to cut into it.”

And Colby Currie said: “I need this cake.”

Katie, whose company is called Katie’s Sweet Art, has created dozens of amazing cakes in the past including iPad and incredibly detailed wolf cakes.

She said: “I’m completely blown away by the reaction the cake’s had. Sarah told me and I just thought ‘Oh my goodness, what is happening’.

“It didn’t take as long as you’d think to make, probably about three hours. It was all Sarah’s idea really, she said she wanted the flats in the background with the two characters in front sitting on the bench.

“When she first came to me with the idea, my first port of call is to look online at other cakes but there aren’t many Still Game cakes.

“But I like that because it means I can put my stamp on it. Ross was over the moon with it which was just lovely.”