GORDON Ramsay hilariously trolled his teenage daughter on her birthday by releasing a clip of her childhood singing.

The Hell’s Kitchen star posted the throwback video of Tilly to his seven million Facebook friends yesterday to celebrate her turning sixteen.

The clip shows the teen, who is following in her father’s culinary footsteps, singing a rendition of Katy Perry’s 2010 hit, Firework.

She appears to be recording herself singing on a webcam and can be heard struggling to reach Perry’s high notes throughout.

Ramsay decided to wind his youngest up by posting the clip for the whole world to see.
And while doing so, he took a pop at Tilly’s singing with a backhanded compliment about her skills in the kitchen.

The video has attracted almost 230,000 views and thousands of likes from followers including footballer Frank Lampard.

Hundreds of Ramsay fans also took to the post to wish Tilly a happy birthday and called her dad a savage for sharing the clip. 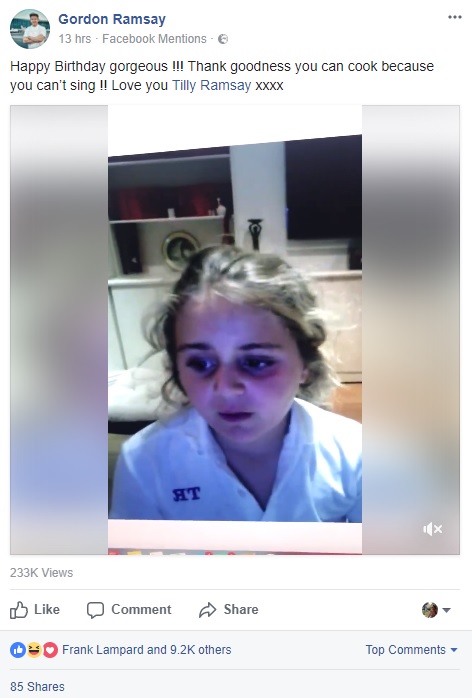 Owen Zhao wrote: “A savage even on his daughter’s bday…”

Scott James London said: “Even ripping on his own kids. Sweet Jesus lol.”

Kellee Cline wrote: “Happy Birthday Tilly. Now go sock ur dad in the nose for that.”
Adriana Andrei said: “You are right, she cannot sing. But she is gorgeous and … is yours. Such a cute girl. Thank you for sharing with us…”

And Priscilla Veliz wrote: “The brutal honesty of the chef father at its best! Hahah love it! Happy Birthday Tilly.”

One fan suggested, Jason Simon, challenged the pair to a sing-off, writing: “I bet she sings better than you, Gordon! I challenge you to sing a song now!”

Despite tagging Tilly in the post, she has remained silent and not responded to the birthday message.

Earlier this year Tilly revealed how her father was one of her toughest food critics.

Ramsay had previously said he won’t be leaving his multi-million pound fortune to his children in his will because he doesn’t want to spoilt them.