After the clip ended excited viewers were left wondering what happened next.

And today the budget supermarket revealed the second part of their love story by introducing their three offspring – Jasper, Chantenay and Baby Carrot.

Released exactly one month since the first installment hit our screens, the short 30 second advert opens with Kevin and Carrot sharing a festive kiss.

As the loved-up veg pull away from each other, three adorable carrots can be seen in the background stretching as they wake on Christmas morning.

The youngsters then run over to their Christmas tree where presents awake – three matching carrot soft toys similar to the £2.99 version Aldi are selling.

Katie then opens her present from her love – a Fifty Shades of Grapes book – while Kevin smiles in delight at his new white and blue scarf. 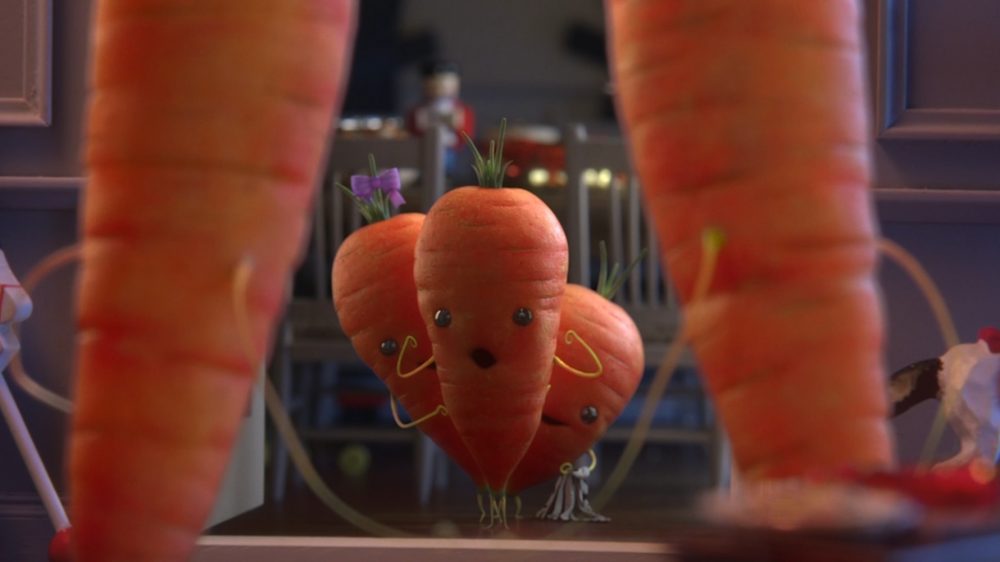 The camera then pans out to show that the carrot family live in a doll house while a human family are shown enjoying their Christmas meal with their own carrot toys.

Christmas music echos in the background while a commentator says: “Two carrots kissing on Christmas morning. Little ones waking tired and yawning.

“Present from Santa under the trees oh the excitement what could they be.

“Moments together with those you hold dear, Merry Christmas to all and a happy new year.”
The adorable duo’s whirlwind romance has caused quite a stir over social media.

Sarah Gee wrote: “I screamed when I was tagged in a post earlier today, how embarrassing, I’m 36 years old and getting excited about bloody teddy carrots.”

Louise Reynolds said: “Omg I was hoping they would have babies but thought that would be next year. Kevin don’t waste much time did he.”

Susan Kelly wrote: “I’m disappointed in Katie. Sure she should off waiting till after her wedding. I fecking hope they getting married now.”

Christine Cutts said: “I see even carrots do things the wrong way by having babies before marriage. Would have liked to see Katie in a wedding dress.”

And Stacy Holdsworth wrote: “Randy little carrots should have got married first.”

Hilariously some have even questioned whether the three carrots are even Kevin’s and called for a DNA test.

Berni Diamond said: “They didn’t waste any time. I think Kevin needs to demand a paternity test though. Seems to have happened a little too fast for the munchkins to be his!!”

And Janice Jones wrote: “Kevin didn’t waste much time. Maybe next year Katie will send him for the chop.”

Adam Zavalis, Marketing Director at Aldi UK, said: “We’re thrilled to see how customers have followed Kevin and Katie’s journey with such anticipation and have taken both characters into their hearts and homes.

“There’s been lots of speculation about how their story will end and it’s very exciting to reveal that they get their happily ever after with the additions of Chantenay, Jasper and Baby Carrot.

“We hope our viewers enjoy it as much as we do as they start planning for the big day ahead.”

Since Kevin first hit out our screens last year for their 2016 Christmas campaign, demand has been high for the stores soft toys on offer.

This year Aldi have decided to add “Plush Carrot Kids” into the mid which come in a pack of three for £2.99.

They will be available to buy in store and online from next Thursday (14th December).