ONE of the world’s biggest baggage handling firms is investigating how an EasyJet customers child car seat got ripped, “burned” and shattered when it was apparently run over.

Rachel Wells could barely believe the state of the chair when she collected it at Bristol Airport’s baggage reclaim on Saturday.

She took the £135 Maxi-Cosi seat on a family holiday to Malaga so she could be sure her daughter was safe in their hire car.

But the seat was completely unusable for Lydia, six months, for the 32-mile journey from the airport to home in Monmouth, Wales.

Rachel, 26, claims a member of EasyJet staff told it was legal for her to travel home with the tot on her lap.

It is unclear how the seat came to be damaged but Rachel says it was placed “conveniently upside down” on the conveyor.

Turned over, she saw deep tears in the fabric, what she described as “burn” marks, tyre marks, stains, and the carrying handle was completely shattered.

Baggage handling giant, Swissport today revealed they have launched an investigation into the incident to stop the same thing happening again.

Speaking today , Rachel said: “I still can’t believe how casual everyone was about the seat on the day.

“They seemed to act like it was a normal event and for whoever it was to just plonk it on the belt is unreal. They had our details surely they could of called for us and explained.”

“The seat was conveniently placed upside down when coming round. I was devastated to lift it off the belt and turn it over to reveal burns, huge tears in fabric, horrendous stains and tyre marks right across the seat.

“The handle mechanism was completely shattered as well as the release button and seat belt holder.”

She added: “I spoke to the ladies behind the [EasyJet] desk who explained that legally I am able to travel with baby on my lap.

“I was mad about this response and said I am not having that on my shoulders. If my baby was to be in accident it would be my irresponsible choice.”

Rachel eventually arranged for a friend with a suitable car seat to make the 70-mile round trip to home.

She added: “I know this will not compensate for the upset and stress caused by this incident but it will at least ensure that you are not out of pocket.

“As promised I have forwarded details of this issue onto the airport to be investigated internally.”

Several social media users have left comments on the photographs of the destroyed car seat.

Chrissie Cooling wrote: “Sorry to see this hun, looks terrible. It was treated with absolutely no care or consideration. I hope you get the justice you deserve.”

Amanda Stevens said: “Disgrace and hope they sort promptly with no stress and quibble like the usual insurance firms who only like to take your money and are gits paying out when you are the victim.” 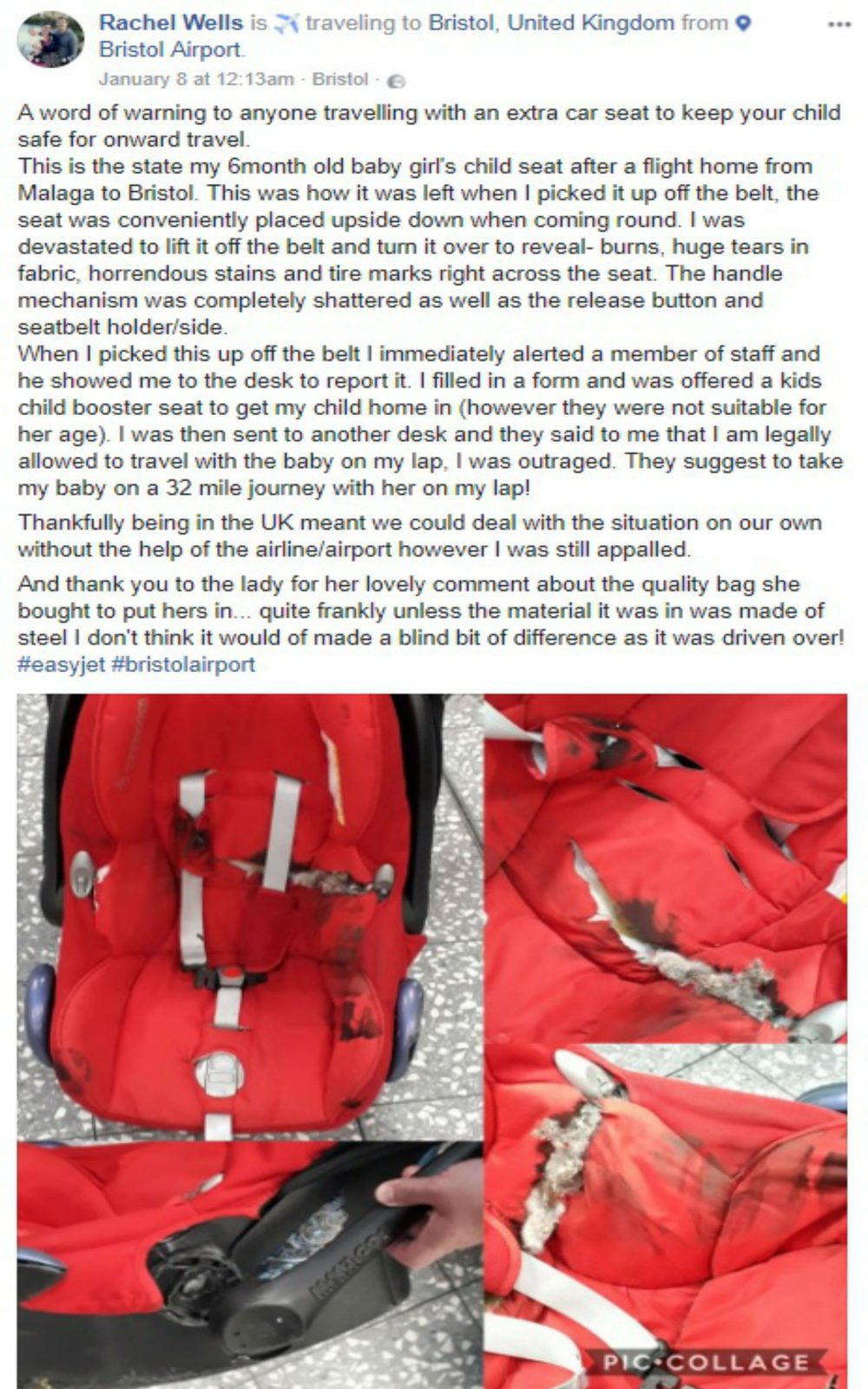 A spokesman said: “We are very sorry to see that Mrs Wells’ car seat has been damaged and we are undertaking a full investigation to ascertain what happened.

“We will take appropriate steps to ensure that incidents such as this are avoided in future.”

A spokesman for the airline today said: “EasyJet would like to apologise that Mrs Wells’ car seat was damaged whilst it was being unloaded from the hold upon arrival in Bristol on 6th January.

“Whilst EasyJet offered to provide a replacement booster seat we understand it was not suitable for the age of the child and are sorry we were not able to provide a better solution.

“In light of the inconvenience caused, we have been in direct contact with Mrs Wells to provide a refund of expenses associated with travelling to purchase a new car seat and compensation to cover the cost of a replacement car seat.”

EasyJet said that luggage tracking body, World Tracer, judged them one of the best in the industry with incidents of damaged luggage running at 0.36 per 100 bags.