LEIGH Griffiths’ brother has been accused of posting anti-English abuse at a Rangers star.

Aaron Griffiths took to Twitter to brand Josh Windass a “guffy b******”.

The term – according to the Urban Dictionary – is used in Scotland to “define” an English person but can also be used to mean a pig.

Aaron today denied any anti-English intent and said he took the word to mean someone who has “posh things”. 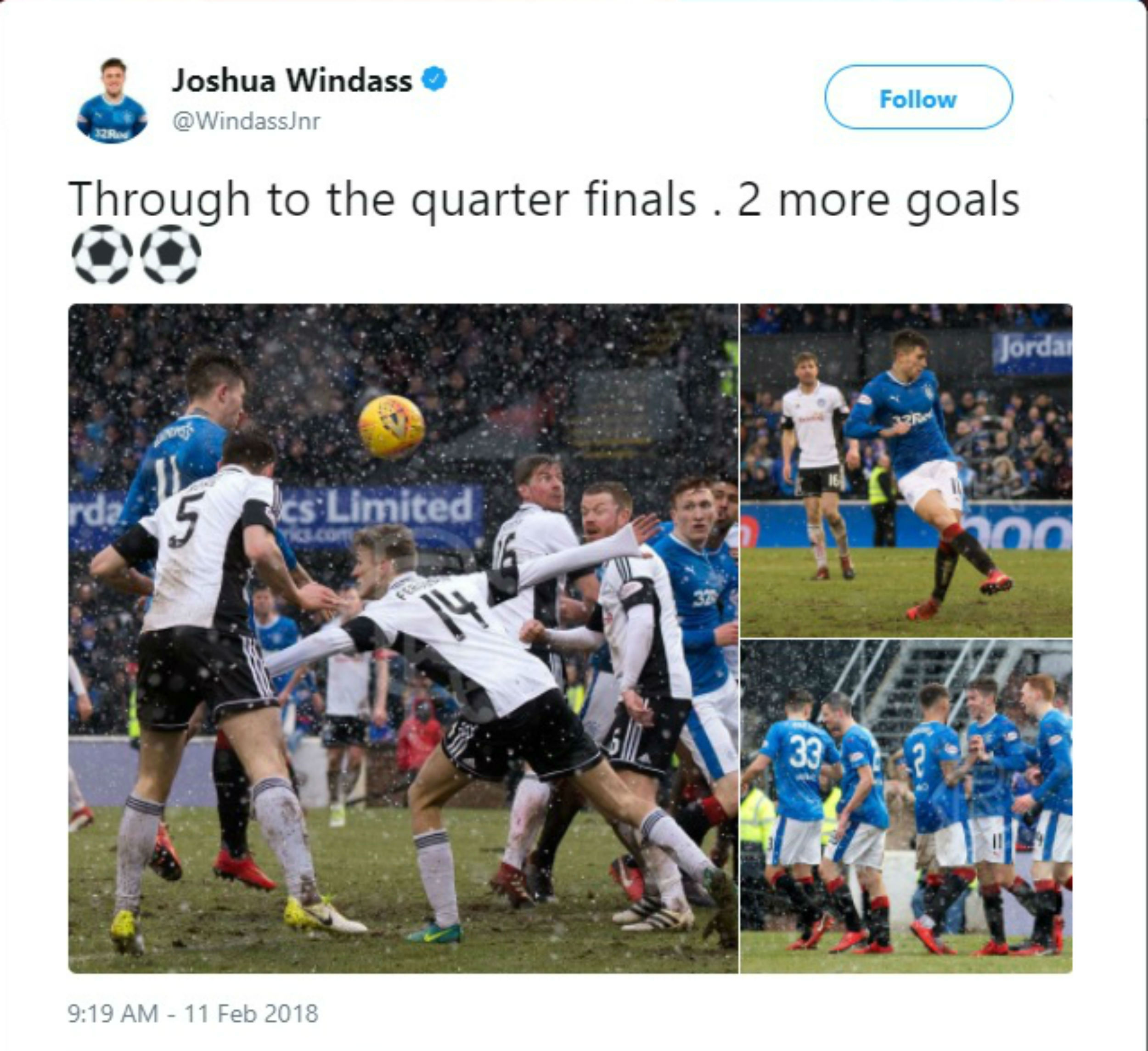 Aaron attacked Windass after the midfielder tweeted about Rangers win over Ayr in the Scottish Cup last Sunday.

Social media users accused him of being just like his Celtic striker brother, who branded Hearts player Rudi Skacel, a Czech, a “f****** refugee” in 2014.

Rangers beat Ayr 6-1 with Windass scoring two and after the match he wrote: “Through to the quarter finals. Two more goals”, along with images of himself from the match.

Aaron Griffiths, who plays as a goalkeeper for amateur Edinburgh team Meadowbank, replied: “Still s*** though, mate, get a grip cheesing about scoring against Ayr and Fraserburgh mate. Try scoring against a good team like Hibs or Celtic ya guffy b******.” 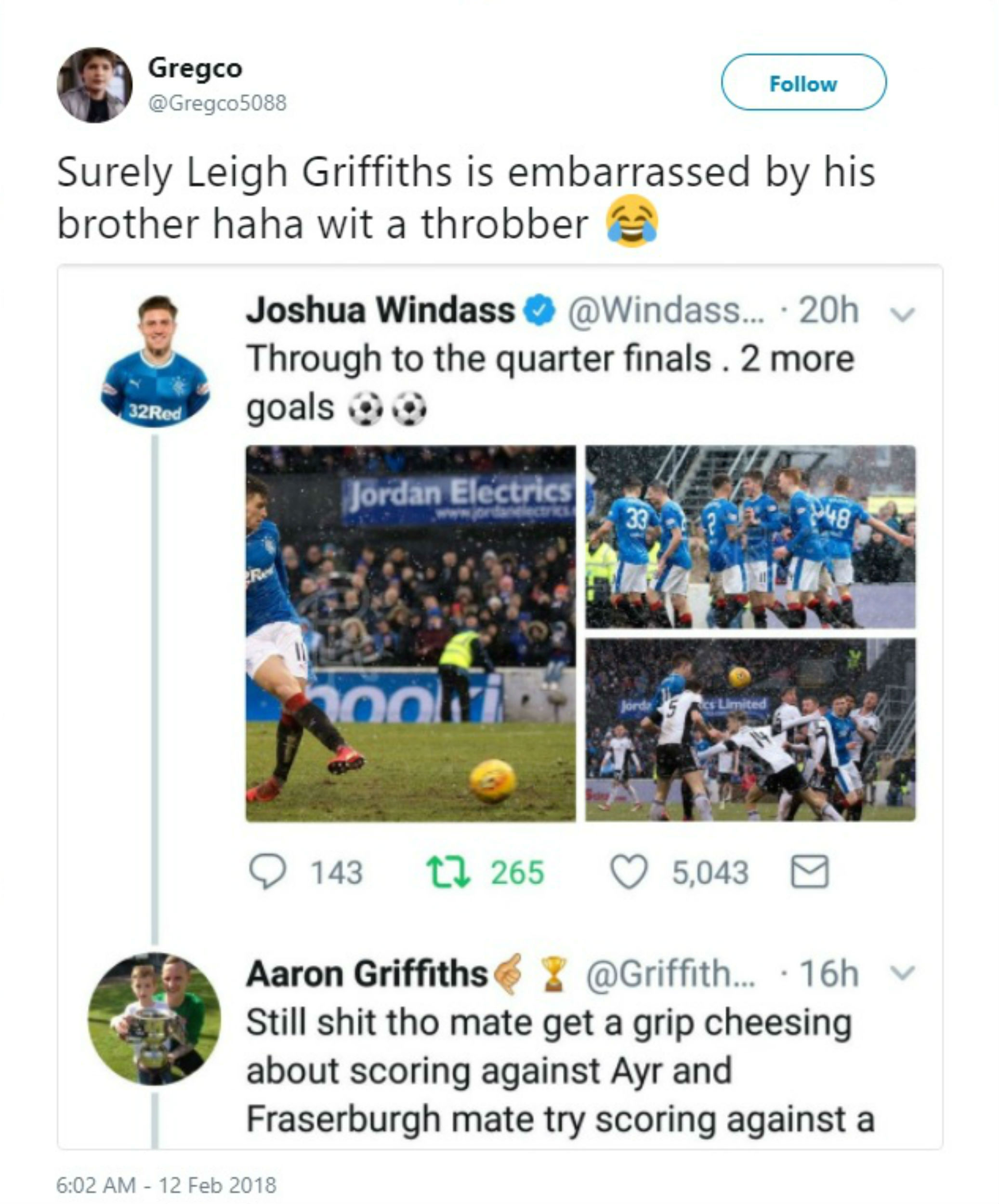 The tweet has since been deleted but has been screengrabbed and shared on social media by outraged Rangers fans.

Gregco posted on Twitter: “Surely Leigh Griffiths is embarrassed by his brother, wit a throbber.”

Another posted a definition of the word guffy as meaning English and added: “Takes after his brother.”

Another said: “Unbelievably Leith Griffiths’ brother seems to be an even bigger tosspot.” 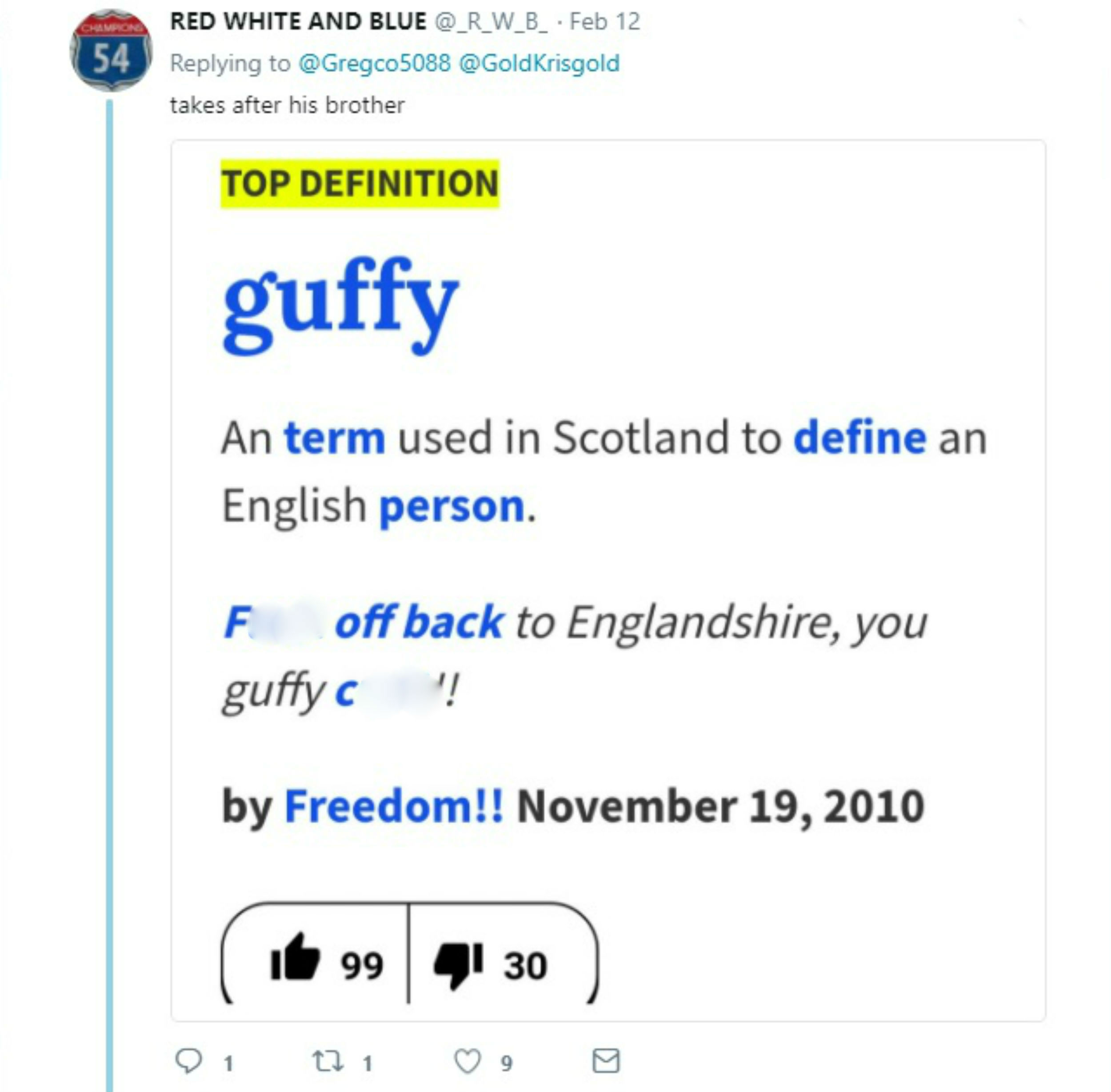 Speaking today (MON) Aaron said: “It’s a Scottish word which means somebody who owns posh things or a geek, so I was using it in that way.

“I’ve got black people in my family so if I’m being racist I’m slagging my own family. I’m not a racist.”

Asked about the claims that his behaviour is embarrasing his brother, he added: “If I’m embarrasing my brother then he’ll come and tell me.

“He hasn’t so until he does I’ll fire on. I just go on Twitter for a laugh and a joke, not to abuse people.”

Aaron did admit: “I’ve been put in Twitter jail. I’m not sure if I’ve been banned for this as they didn’t tell me what it was for.”

In 2013, Leigh Griffiths was charged under the telecommunications act after telling Twitter user Zak Iqbal to “f*** off back to your own country”. The charges were dropped four years later.

In 2015 he pled guilty to singing a song with offensive lyrics, including the “Rudi Skacel is a f****** refugee” in a pub full of Hibs fans. He was admonished by the judge at Edinburgh Sheriff Court.