FURIOUS parents have accused makers of formula milk of “sneakily” reducing the amount of product – while keeping the price and even the packaging the same.

Aptamil customers claim the amount of formula has been reduced from 900g to 800g with the price remaining at £11.

Even worse, they accuse the makers of keeping the packaging exactly the same size.

Danone UK, the makers of Aptamil First Infant, recently announced a change to the formula of the product.

Customers at first assumed the amount in each box was the same because there was no apparent difference in the packaging.

But eagle-eyed Jessica Sewell, from Derby, wrote on social media: “All new parents be aware – Aptamil have included a leaflet in their packaging to say their formula is changing.

“Nowhere on this does it say they are reducing the size of the carton by 100g. 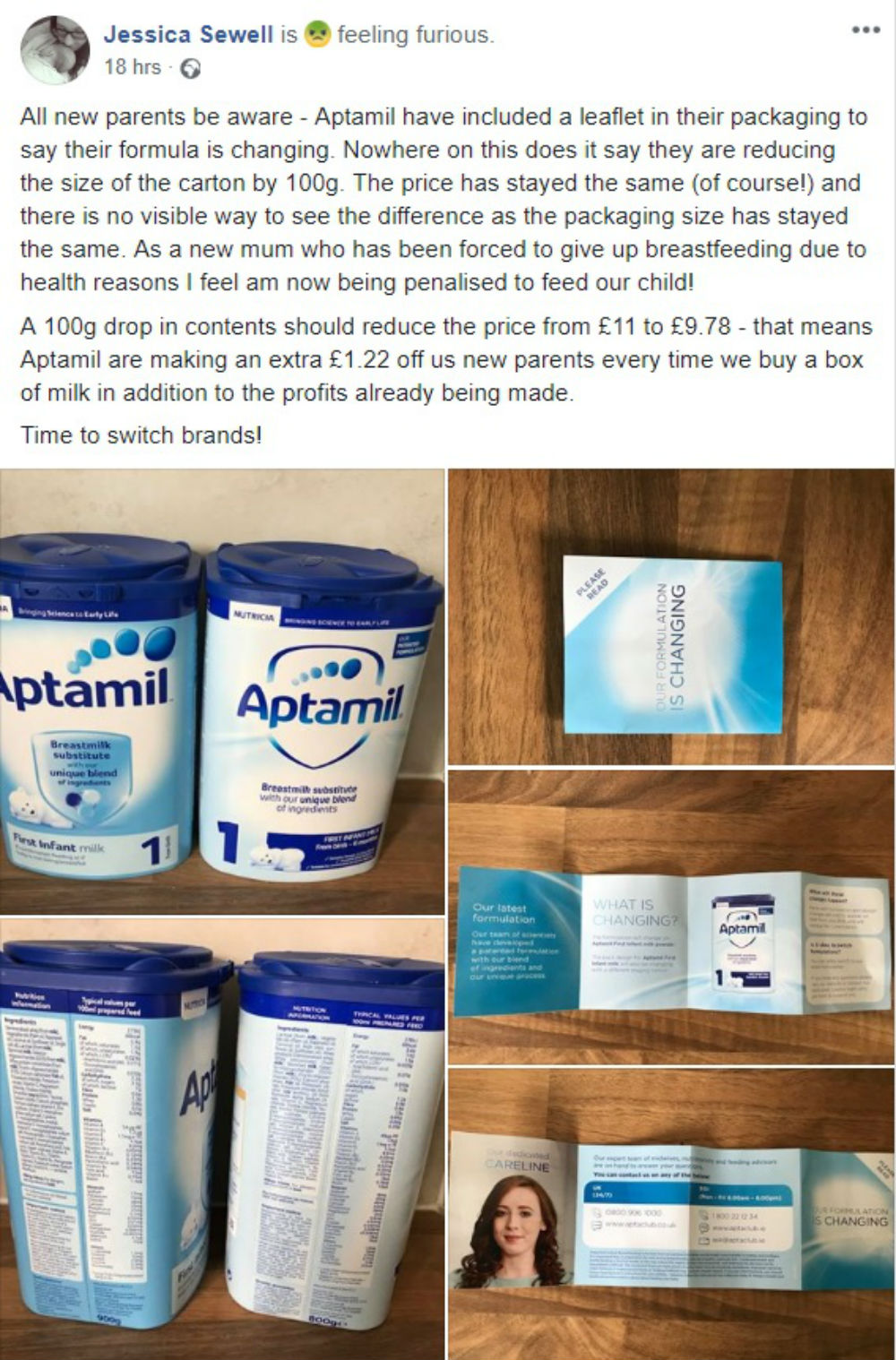 She added: “As a new mum who has been forced to give up breastfeeding due to health reasons I feel am now being penalised to feed our child.

“A 100g drop in contents should reduce the price from £11 to £9.78 – that means Aptamil are making an extra £1.22 off us new parents every time we buy a box of milk in addition to the profits already being made.

Ellie Hood also complained on the Aptamil Facebook page on Monday about the change.

She said: “Just purchased more milk for little girl and noticed new packaging, knew about this due to leaflet explaining new formulation but did not explain it would be going from 900g to 800g for same cost.

“On comparison the new formula has more salt and sodium?! And less calcium?! Praying my little girl doesn’t have any adverse effects from the changeover as she already took a while to settle with formula as it is.”

Phyllis Bushell wrote: “Are you going to answer any of your posts about your change of volume in your tubs…and also the change of ingredients?

“I have a one-year-old who thankfully rarely needs formula now. I’m due a baby in August. Looks like i might have to change brands!”

And Izzy Bunton from ChIppenham, Wiltshire said: “Not happy with this new milk at all. If it’s not bad enough that there is less in and still costs the same, my baby boy struggled to drink his last bottle and the milk just didn’t look right.”

Danone UK issued a small leaflet in their old 900g tubs to inform customers about their new recipe change.

The leaflet states: “Our team of scientists have developed a patented formulation with our blend of ingredients and our unique process.

A spokeswoman for Aptamil today (wed) confirmed they had reduced the amount of formula in packs.

She said: “We are sorry to hear that some parents are not happy about the changes we have made.

“We have launched our most innovative formula in 15 years and have invested significantly in research and equipment whilst also facing additional ingredient costs.

“Rather than increase the price we took the decision to maintain the price per pack but standardise the size to 800g (from 900g).”