A WOMAN has posted horrific pictures which she claims show how a bungling nail technician chopped off the top of her little finger.

Gruesome photographs show Joan Barrow’s bloodied pinkie wrapped up in a plaster, while the tip part of her little finger can be seen missing.

The 38-year-old had visited a nail bar inside Ards Shopping Centre in Newtownards, Northern Ireland on Friday to get a new set of nails when the grim incident happened.

Joan claims that whilst cutting her new nails down to size, the bungling nail technician went too far and managed to chop the tip of her finger off.

Not realising how severe the cut was, Joan sat while the male beautician finished off her the rest of her nails.

But on further inspection she later realising the extent of the damage and ended up in hospital getting her mangled finger looked at. Joan is consulting a solicitor today about a possible compensation case.

Joan’s daughter Taylor Barrow has since posted about the incident on Facebook to warn others against using the unnamed nail bar – branding the staff “absolute moonbeams”.

She wrote: “Them clowns…have took the top of my mum’s baby finger off while cutting the nail down to size, absolute moonbeams.”

The post including two images of Joan’s nails – one showing her four unpainted fingers with acrylic nails while a piece of bloodied tissue is shown behind her butchered wrinkled pinkie.

Another image shows her hand after she allowed the nail technician to paint the other four nails and bandage up the affected one.

The post has since attracted thousands of comments from social media users, horrified by the images. 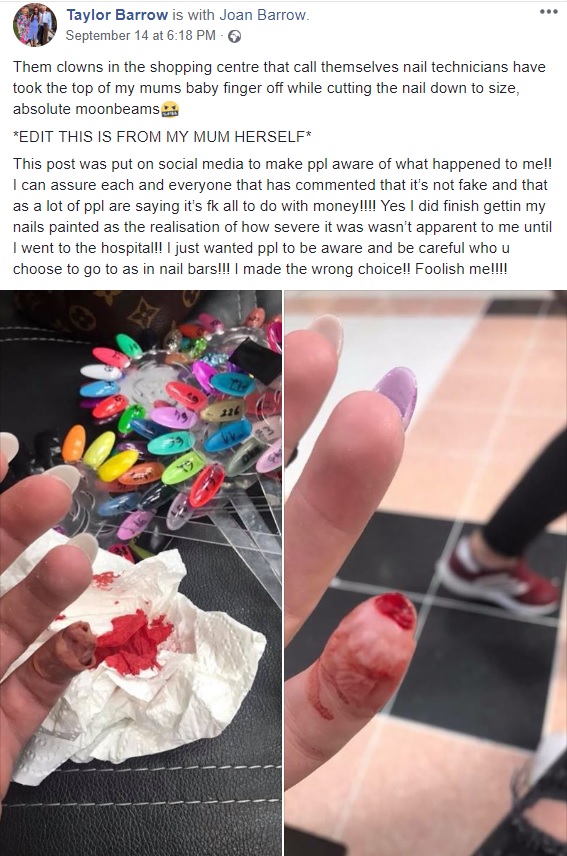 Helen Dearden wrote: “Ah jeez. Looks like they chopped the hyponychium. The skin that extends beyond the nail bed and holds on to the free edge. They’re known for doing this. Claim!”

Victoria Clarke wrote: “I went to them once and would never go again. They cut into the sides of at least three of my fingers. They were handless.”

But some people accused Joan and her daughter of photoshopping the images, prompting the mum to hit out at trolls.

Joan herself hit back: “This post was put on social media to make people aware of what happened to me.

“I can assure each and everyone that has commented that it’s not fake and that as a lot of people are saying it’s f*** all to do with money.

“Yes I did finish getting my nails painted as the realisation of how severe it was wasn’t apparent to me until I went to the hospital.

“I just wanted ppl to be aware and be careful who u choose to go to as in nail bars. I made the wrong choice. Foolish me.”

She added: “The fella that was doing the nails was using normal nail clippers but massive ones and when he went to cut my baby nail he caught the tip of my finger and took it off.”