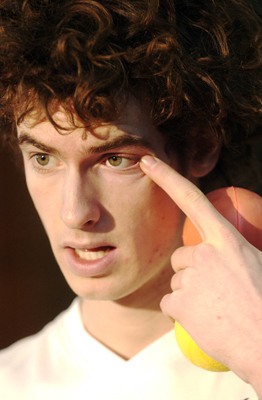 PATRIOTIC Andy Murray has been given the all clear to wear Scottish sweatbands at this year’s Wimbledon championship.

Stuffy officials were forced to consult their code of conduct after learning the proud Scot was planning to don saltire-design wristbands.

The traditional All England Club has a strict dress code where players have to wear an all-white kit.

However last night Wimbledon chiefs confirmed the British number one would be allowed to bear the striking blue wristbands much to the delight of his Scottish fans.

Partisan Murray, 21, usually favours playing in an all-blue kit but will be unable to do so at SW19 because of the tight rules.

However the Dunblane player will still be able show his Scotland patriotism after officials confirmed he would be allowed to don his saltire wristbands.

A Wimbledon spokesman confirmed: “We don’t have a problem with him wearing Scottish sweatbands.

“It’s only shorts and tops that have to be predominately white.  These are allowed slight flashes of colour but nothing more.

“Manufacturers consult with us before the championships start to ensure their kit designs are acceptable.

“Andy can even throw his sweatbands into the crowd if he wishes, although I’m not sure if I would like to be the recipient after a five-setter.”

Murray became a hero with the Tartan Army in 2006 after declaring he supports every team who plays against England.

Iain Emerson, editor of the Famous Tartan Army Magazine, says he has the full backing of Scottish football fans.

He said: “Andy is a great ambassador for Scotland and the fact he wants to show his patriotism is great.

“Given the championships are held at the All England Club victory would be all the sweeter.

“The whole of the country will be behind him.”

Murray not only has the hopes of Scotland on his shoulders but also the UK being the only British player with a realistic chance of winning the championship.

He is desperate to become the first ever Scot to win the men’s title having missed last year’s tournament with a wrist injury.

The fiery player has enjoyed a meteoric rise since reaching the third round on his Wimbledon debut in 2005.

He went one better the following year reaching the fourth round where he was defeated by the Greek, Marcos Baghdatis.

The championships start this Monday.