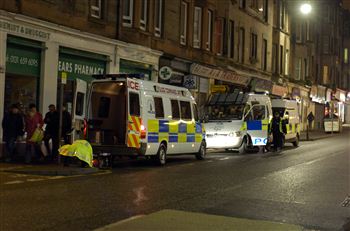 A PENSIONER was left with a six inch knife wound to his face after being attacked in a busy street.

Frank McGeachie, 83, was slashed in broad daylight as he walked home in Edinburgh after a quiet afternoon drink.

Five minutes earlier, a 76-year-old woman was punched in the face in what police believe to be two unprovoked acts by the same man.

Police swarmed the busy street to begin questioning witnesses and searching the area for the knife while the victim was rushed to hospital.

He said: “He was just walking home in the middle of the day. The whole family will be really upset by about this.”

And Eileen Bowser, who works nearby in Middleton’s pub, where Mr McGeachie is a customer said: “We are all shocked. He keeps himself to himself and would never hurt anyone.”

After both attacks the suspect was seen walking away towards nearby London Road.

Mr McGeachie is said to be doing well as the police act urgently to track down the suspect.

A police spokesman said: “These attacks were entirely unprovoked, and in both cases, extremely shocking.”

The suspect is described as 30-40 years old, around 5ft 7in-5ft 10in, slim to medium build with a dark complexion, heavy stubble and dark clothing.

The attacks took place at around 1pm and 1.05pm on Wednesday.