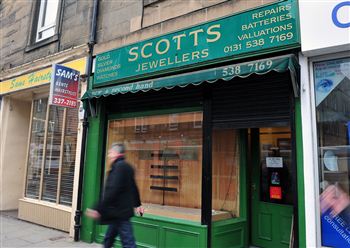 A FAMILY-run jewellers had four thousand pounds worth of swag stolen from their shop window in the early hours of yesterday morning.

The thief, who was clad in black and carrying a crowbar, forced open the metal shutters, smashed the window and took over 100 items of jewellery.

Bangles, chains, pendants, crosses and St Christopher medals were all nicked in the night-time raid on the Edinburgh shop.

And it’s the second time that the business has been broken into, with exactly the same thing happening eight years ago.

John Taylor runs Scotts the Jewellers on Dalry Road with his wife and has had to close whilst repairs are made and the display is fixed.

He said: “We have an alarm in the shop so they must have been really quick. They would’ve had about thirty seconds to grab as much as they can.

“It’s not just the jewellery that they’ve ruined but the window display as well. All my fabric, ring holders and that are only a couple of months old. I’m going to have to order the fabric especially from England so I don’t know how long that will take.

“It just looks an absolute mess at the moment.”

John installed insurance approved bomb proof glass in his windows and new steel shutters to try and stop a repeat of the break-in eight years ago.

But the thief used pure force to get past the security measures and reach the stash when he struck at 3.20am.

John said: “He must’ve used some force to break that glass. The shutter was just peeled back and the glass smashed. Whatever it was he used it was powerful.”

Now he’s beefing up security in his shop even more before reopening in a couple of days time.

Police are asking for information on the robber, who dressed the part when he smashed into the shop.

He was described by a witness as being a slim built man in his twenties, dressed in a black hooded top and black bottoms and carrying a crowbar.

Police are warning people not to buy any jewellery that might be from the haul.

A Lothian and Borders police spokesman said: “Initial estimates are that the suspect has made off with around £4000 worth of jewellery, and we are anxious for any information that can help us recover the stolen goods.

“We want anyone who was in the area at the time and noticed anyone acting suspiciously there to get in touch immediately.

“Similarly, anyone who thinks they may have been offered any of the stolen items for sale is urged to contact police as soon as possible.”