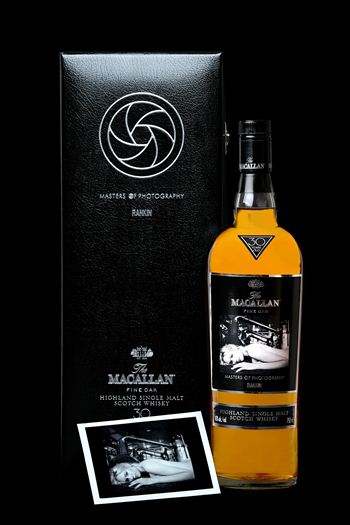 AN EXCLUSIVE range of whisky which features a nude model on the label has been awarded the Worst Marketing Campaign in the whisky industries version of the Oscars.

The limited edition run of rare Macallan malt has the hefty price tag of £950 a bottle, and each one includes an original Polaroid taken by arty Scots snapper Rankin.

The bottles also have an image of the photographer’s model girlfriend on the label.

But the much-publicised marketing campaign seems to have backfired as the 30 year-old malt has been voted for The Drammies’ dreaded marketing award.

Organised by the respected Scotch Blog website, the Drammies are considered one of the major online awards for the whisky industry.

One disgruntled whisky buff on the site said: “Putting the price of a bottle of Fine Oak 30-year-old up by £500 just because it might have a nudie picture on it is an outrage.”

But Macallan have defended their product by saying they would “not put a new label on an existing whisky and sell it a higher price”.

The Drammies hit the headlines last year after it was revealed drinks giant Diageo had been caught trying to fix the vote.

Organisers say they caught the world’s largest drinks producer voting for themselves dozens of times during the voting process.

The major winner in this year’s awards goes to the Islay-based Ardbeg who walked off with the coveted Distiller of the Year award.

Glenmorangie’s Signet took the Most Innovative New Product gong, while the Japanese-made Karuizawa 1971 was voted the Best New Product.

The small Clynelish distillery in Brora has plenty to smile about as they scooped the Most Under-Rated Award for their Clynelish 14 malt.

But it was Macallan who were the main talking point of the awards.

Their unique bottle comes presented in a black leather box, lined with velvet, and containing an original Rankin Polaroid.

Each bottle has an individually printed label, which matches the specific Polaroid, and a booklet of authenticity signed by the famous artist.