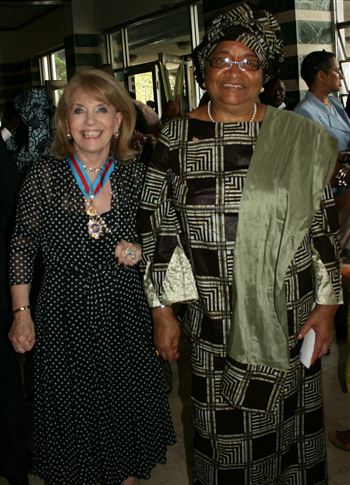 BARGAIN bus trips from Scotland have helped to build a hospital in Africa.

Megabus and Stagecoach founder Ann Gloag used the money from thousands of cheap £1 journeys to pay for a crumbling Liberian hospital to be rebuilt.

And the Scots entrepreneur has now been honoured by the country’s president for her work, honouring her as a Commander of the Order of the Star of Africa.

The African award comes five years after Gloag, 66, picked up an MBE – in the same year failed RBS boss Fred Goodwin was awarded a knighthood.

Liberian rebels decimated the JFK Hospital in the capital Monrovia during 14 years of conflict in the war-torn country.

But bus tycoon Gloag, who trained as a nurse before launching her bus empire, donated almost £1million towards its renovation, and is in the country this week to celebrate its reopening.

She hopes the JFK Hospital will regain its pre-war status as one of Africa’s top teaching hospitals.

She said: “I am deeply honoured to receive this award. It is a great privilege and I am delighted to receive such recognition from President Ellen Johnson-Sirleaf, a woman I greatly admire.

“Working with the president, the health department and the people at the JFK Hospital has been one of the most rewarding experiences of my life and the people of Liberia are extremely fortunate to have a President with such vision and dedication to rebuild the country for its people.

“I am particularly pleased about the establishment of the obstetric fistula unit which will treat the thousands of Liberian women who currently live in silence and shame. All women deserve proper healthcare during pregnancy and childbirth and it is disgraceful that in the 21st Century millions of women in Africa do not have this.

“The unit at the JFK Hospital will help change that and I will remain committed to supporting the hospital and the people of Liberia.”

As part of the renovation, a dedicated surgical unit to treat women suffering from obstetric fistula has been established at the request of Gloag, who set up the Freedom From Fistula Foundation last year.

The devastating condition renders women incontinent after prolonged and obstructed childbirth yet is treatable and curable in more than 85 percent of cases.

Speaking at the ceremony, president Johnson-Sirleaf said: “Ann Gloag’s support is a demonstration of the power of those who care.

“Her support for the healthcare system in Liberia is exceptional and her spirit of caring, sharing and dynamism demonstrated throughout the project ensured the successful implementation of the renovation work.

“The honour of the Order of the Star of Africa is a special recognition of the contribution Ann Gloag has made in support of the country and its people.”