“I Want to Make My Dead Mum Proud” 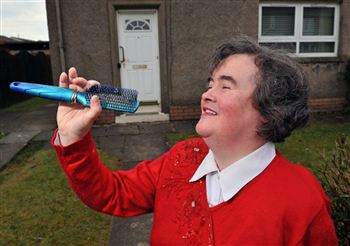 BRITAIN’S Got Talent sensation Susan Boyle has vowed to make her dead mum proud – by singing for the Queen.

She revealed that is now her biggest ambition after proving to be the smash-hit in last night’s show.

And the 48-year-old virgin said that her success is all down to her beloved mum Bridget who urged her to do something with her singing talent – even making her join a choir aged 12.

Devoted Catholic Susan – who wowed judges with her performance of I Dreamed a Dream – spent years caring for her elderly mum before she died two years ago.

Even now she feels the heartache of her loss and revealed she plans sing her heart out in the competition to make her parents and the rest of her family proud of her.

Speaking at the home in Blackburn, West Lothian, where she has lived her whole life, she said: “I was always musical – yelling when I was a baby, singing into a brush and singing in the shower.

“It was my mum who got me into singing properly – she knew I had to do something with my voice because she knew I was talented.

“Pushed me into the choir”

“She was the one that pushed me into joining a choir all those years ago, when I was about 12. I remember she told me to start with the choir and just see where it took me.

“It’s hard to believe it’s taken me to Britain’s Got Talent.

“She was 91 when she died but still very spritely. She and my dad, Patrick, will both be looking down on me and they will be so, so proud.”

Susan was looking after Bridget when the talent show first aired and even then she was desperate to have a go.

“My sister has a beautiful voice”

She said: “I watched the show every year, and I always thought about entering – but I was caring for my mother.

“This year I thought I’d just go for it.

“My sister sings too, and she’s got a beautiful voice. I tried to get her to enter too but she wasn’t keen.”

So Susan took a trip to Glasgow’s SECC herself back in January for the audition that would launch her to stardom.

The judges had to hold their laughter when Susan burst in saying she wanted to be like Elaine Paige.

But seconds into her song, they were all on their feet giving her a standing ovation.

She said: “The audience laughed when I said I wanted to be Elaine Paige.

“But they weren’t laughing when I finished. If I could be even half as good as Elaine I’d be happy.

“It was very nerve wracking being in front of the panel. I had no idea what they would say, I just went out there and did my best.

“And they liked it. I was shocked by their reaction actually.

“My mouth was just wide open when they said all the nice things they did – I honestly thought there must have been bribe money under the table for them or something.

“I had been practicing for a couple of weeks before, at least an hour a day, and it paid off.”

All the judges showered her with compliments, but one person’s thoughts were more important to her than the rest – Piers’.

She said: “I love Piers, I think he is really nice. I unfortunately didn’t get to speak very much to him on the day, but he said some really complimentary things.

“He’s such a gentleman, and very professional.

“He’s honest too which I like. I definitely have a soft spot for him, I’ll need to do well in the competition so I can see him again!”

Susan is tight-lipped about how she thinks she’ll do in the competition, but did let slip that she is planning to sing Whistle Down the Wind in the next round.

And she says all she will do is try her best, and hope that her dream comes true.

She said: “Singing for royalty is a dream of mine – I’d absolutely love to sing for the Queen at the Royal Variety Show.

“All the contestants are very good. I will just have to do my best and see what happens.”

But she’s hoping her West Lothian roots might give her an extra chance – just like Bathgate-born X Factor star Leon Jackson, and previous Britain’s Got Talent contestant Andrew Muir, a singing plumber from Fauldhouse.

“Must be something in the water”

She said: “I watched Andrew singing in the show a few years ago, and then Leon winning X Factor. They are both from West Lothian too. I know them both and they are both lovely and very talented.

“There must be something in the water. Hopefully I’ll do as well as they both did.”

Susan – who has won a local talent show before and also took part in My Kind of People with Michael Barrymore – says she hopes the show will highlight her disability too.

She said: “I was slightly brain damaged at birth, and I want people like me to see that they shouldn’t let a disability get in the way. I want to raise awareness – I want to turn my disability into ability.”

And she said she couldn’t have done it without the support of her family and friends – and her cat.

She said: “I live myself with my cat Pebbles. She isn’t enjoying the attention as much as me – she ran off up the stairs as soon as the film crew for the show came into the house. She didn’t come down for hours.

“But I have the support of all my brothers and sisters and my neighbours and friends – everyone thinks it’s just great.”