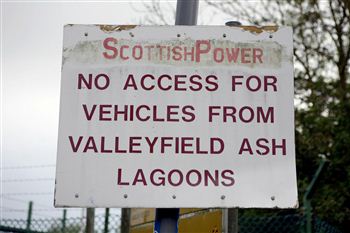 A SCHOOLBOY is recovering after a terrifying fall down a drainage shaft.

The 14 year-old broke into a huge ash pit in Fife before plummeting 12ft under the ground.

Ten firefighters spent half an hour trying to fish the teen out, eventually lowering a ladder to pull him to safety.

Now Scottish Power say they want to speak to the youngster and warn him of the dangers of the site, which they use to dump pulverised fuel ash from Scotland’s filthiest power station.
The boy’s neighbours in High Valleyfield, Fife, said he had “a lucky escape” after wondering onto the reclaimed land in the River Forth.

The lucky lad was walking with a friend and his mother, who phoned Fife Fire and Rescue at 7.20pm on Monday, according to a spokesperson for the emergency service.

They said he only suffered minor injuries to his side after tumbling down the hole. 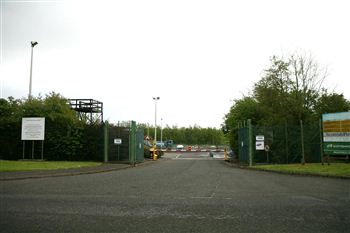 But he’s set for a further shock when energy bosses grill him for ignoring warning signs on perimeter fencing around the site, known locally as the “ash lagoons”.

A Scottish Power spokesperson said: “As far as we are aware, a 14 year-old boy broke through one of our fences. He then actually got down into one of the drains and became stuck.

“Our security guard raised the alarm and he was safely taken off the site. There are signs up everywhere warning that it is an operational site.

“We are going to speak to the children to find out why they went onto the site and warn them about the dangers that are present.”

The ash pans were constructed in 1968 for the disposal of ash slurry from Longannet Power Station, 6km west along the coast.

Only Scottish Power officials and registered bird watchers can access the site.