AN ALARM engineer who smashed a glass into his sister’s ex-boyfriend’s face has escaped a jail sentence. 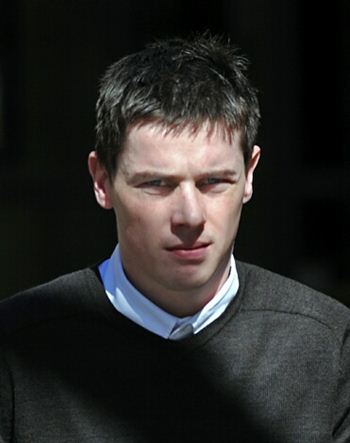 Iain Hay, 24, shattered a pint tumbler into Kevin Walker’s face while Mr Walker was on a night out with his new girlfriend following a split with Hay’s sister.

Mr Walker’s eyeball was left in tatters by the assault and needed surgery to repair the damage, with medics saying it is likely he will never recover.

His face will also be scarred for life following the unprovoked attack last July.

But at Edinburgh Sheriff Court Hay was given a two year probation order after a string of glowing character references were submitted to the court.

Hay will also have to pay Mr Walker £5,000 in compensation, carry out 200 hours of unpaid work and will be tagged overnight for six months.

Fiscal depute Alasdair MacLeod had told how Mr Walker had been on a night out to the cinema with his girlfriend and was walking home when he spotted someone who he knew.

Mr MacLeod said: “He then struck Mr Walker with the glass which he was holding in his right hand.

Mr MacLeod said: “Staff noted a shard of glass in the left eye and a misshapen pupil which indicated that the glass had punctured the globe.”

Sentencing, Sheriff Kenneth Maciver described the assault as “unprovoked” and said that had it not been for several letters in support of the first offender, he could have been jailed for two years.

Sheriff Maciver said: “I don’t need to tell you that you find yourself in a serious trouble. In this particular connection you have committed what I regard as an unprovoked attack.

“There are every so often cases which I see that make me wonder whether a custodial sentence is truly necessary in the public interest – this is one of those cases.”

Sheriff Maciver said because Hay was a first offender and had produced “a series of quite remarkable references” he was able to stop short of jailing him.

He ordered Hay to pay £5,000 of compensation to Mr Walker at £100 per week. Sheriff Maciver also ordered that Hay complete 200 hours of community service and attend anger management counselling.

Hay was also placed on a six month tagging order which will keep him at home between 9pm and 6am for six months.

Sheriff Maciver added: “It may be tough Mr Hay but I assure you it is better than the alternative.”