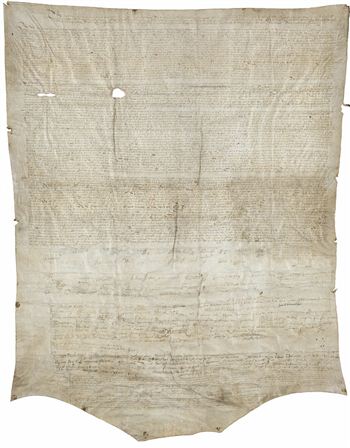 A RARE copy of one of Scottish history’s most important documents has been saved by an ex-pat in America – for six times its value.

Known as “a contract with God”, only 12 copies of the National Covenant are known to exist in library records.

Bidders from across the globe battled it out in a bid to take it away from Scotland.

But the auction winner, who is based in America, vowed to ensure the book’s Scottish roots remained intact.
The new owner, who wished to remain annonymous, is a former St Andrews university student.

They said: “It is  a hugely important historical document and my main interest in it lies from me having studied for my Phd in Church History at St Andrew’s University in Fife.

“I am looking forward to studying the document in more detail.

“It will remain in Scotland for the time being in the care of my son who lives in the country.”

Church leaders drew up the “contracts” to document Scotland’s opposition to a bid by King Charles I to introduce a controversial Anglican prayer book into the Scottish Kirk.

It is signed by over 100 Covenanters including the Earls of Montrose, Cassillis, Eglinton, Wemyss, Rothes, Lindsay, Lothian and Lord Blamerno.

Simon Vickers, a book expert at auctioneers Lyon and Turnbull said: “This is an incredibly good price for a  copy of the National Covenant, we had a lot of interest in it with phone bidders from around the world.”

The prize documents was purchased in the 1950s from a bookseller by a private collector of manuscripts for £100, a not inconsiderable sum at the time.

The last copy of the National Covenant to go up for sale, originally sent to the people of Teviotdale in Roxburghshire, went for £500 in 1978.

£50k hip operation for King Charles II and his horse