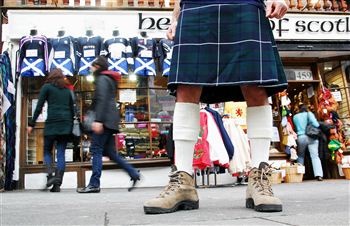 A CLAN chief is calling for a “tartan trademark” to stop cut price cloth being fobbed off as authentically Scottish.

Lord Jamie Sempill, director of the world’s biggest clan gathering, fears tourists are being conned into buying fake Scots goods made in China or India.

He says a kilt copyright would force the fakes to make it clear that their goods aren’t made in Scotland.

But his plans to change to European law to protect the iconic tartan goods would still be “open to abuse” according to the Scottish Tartans Authority.
Lord Semple, a former hereditary peer who inherited the chiefdom of the 500 year-old Semple clan in 1995, is the organiser of The Gathering 2009.

He said: “The point is to make it very clear that when you pick up a tartan scarf or other tartan product, that there is a legal requirement for it to state its country of origin.

“I have no problem with the quality of some of these items necessarily, but I think we’re doing a great disservice to international visitors who want to take home something genuinely Scottish but end up going away with something produced in China or India.”

Moves have already been made to take the tartan battle to the European Parliament.

Brian Wilton of the Scottish Tartans Authority called on EU chiefs to extend their protection scheme to include heavyweight legal protection to descriptions such as “Scottish tartan,” “Scottish kilt” and “Highland kilt.”

He said: “We have been grappling with this problem for quite some time and regrettably it isn’t as simple as might be imagined.

“Almost every scheme we’ve looked at is open to abuse if companies are determined to mislabel imported goods and hoodwink visiting shoppers.

“If we can get Lord Semple on board then perhaps we can get the powers that be to sit up and take notice before the last vestiges of Scotland’s Highland dress heritage slip down the pan.”