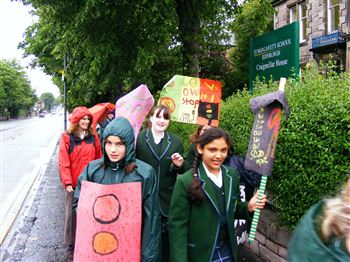 FED-UP school kids have taken to the streets to campaign against careless motorists speeding past their school.

The young road safety campaigners have been forced to act after a series of near-misses outside St Margaret’s School in Edinburgh.

The well-heeled private school is situated on one of the capital’s main arterial routes through the city and school chiefs have been protesting about speeding drivers for years claiming the road “is an accident waiting to happen”.

Pupils braved torrential rain and armed themselves with banners and placards to form a ‘walking bus’ and paraded along through the area near to the Cameron Toll shopping centre.

They have timed their protest to coincide with road safety charity Brake’s bid to encourage more than 150,000 kids from across the country to form the largest walking bus ever seen.

Eileen Davis, head-teacher at St Margaret’s, hopes the safety exercise will not only encourage drivers to slow down but to also educate the children on the dangers of the road.

She said: “When there’s a jam in the main lane, people get impatient and use the Greenway bus lane and they don’t always see the junction or the pedestrian crossing.

“The speed some people drive at is a serious issue and it’s an accident waiting to happen.

“I actually hear the odd bump and rush to my window. So far it’s just been little bumps involving cars who have pulled out of a side road on to the main road.

“But I’m not going to hang around waiting for someone to get injured.

“We’ve had a couple of narrow misses where groups of children have been waiting to cross the road at the pedestrian crossing and cars have just come speeding past because they’ve either not been able to slow down in time or they’ve not seen the lights.”

Figures reveal a child is hurt or killed on foot every 20 minutes in the UK with most on the way to or from school, and Mrs Davis is urging Edinburgh Council to install 20mph zones and flashing lights outside the school before the new term begins.

Mary Williams OBE, chief executive of Brake, said: “There can be no driver who doesn’t know that the faster you drive, the less time you have to react, the harder you hit, and the more likely it is that a child will die or be maimed.

“Through this event we are urging drivers to make a commitment to always drive at 20mph or lower around schools.”