Hunt for hitman after dad of two blasted with shotgun

A SHOTGUN toting hit-man blasted a doting dad of two in his own garden after lying in wait for him to return home from giving his dog its last walk of the night.

Douglas Downing, 39, from Willowbrae in Edinburgh, was reaching his front door when a masked gunman opened fire – striking him once in the lower body area – before missing with a second burst of gunfire and fleeing into the dark. 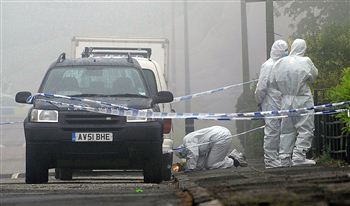 The stray cartridge smashed through a ground floor window of the well tended terraced property on Paisley Drive where his partner Carol McEvoy, originally from Coatbridge in Lanarkshire, had been with their two children – Luis eight and Cameron, nine – at the time.

Shocked neighbours and Carol are understood to have rushed to the stricken plumber’s aid as police and paramedics were called to the scene. It’s understood the pet dog escaped injury.

A silver car parked in nearby Meadowfield Drive was understood to have been spotted screeching away from the area at speed and is now subject to intense police attention as they step up their hunt for the mystery gunman.

An ambulance ferried the stricken dad to Edinburgh Royal Infirmary where he underwent surgery to his wounds cited by different sources as being either his stomach area or groin. Detectives were unwilling to confirm precisely the nature of his injuries today.

Officers leading the hunt say they are in no doubt that Mr Downing was the intended target – but said he had no obvious connections with gangs, drugs or other criminal activity and seemed to be nothing but a respectable parent.

The normally quiet suburban street near Parsons Green Primary School was abuzz with activity all day yesterday as forensic experts dressed in white coveralls and cap wearing search teams combed every inch of the area for clues.

Blood spatter was clearly visible against the light coloured walls of the home as the morning mist lifted, Mr Downing’s works van still parked in its usual spot as police erected huge barriers at both ends of the street to seal off the view.

Brightly coloured markers were laid on the ground by the search team hunting for clues as white suited forensic experts combed the area.

Last night officers described the attack as “lethal and life-threatening” and said that while they could never rule out a case of mistaken identity, they were satisfied that Mr Downing was deliberately targeted.

Speaking at the scene Detective Superintendent Alan Jones said: “It was around 12.40am when he victim was walking home from Willowbrae Road with his Collie dog.

“He was in his garden when he heard rustling behind him. A shotgun was then discharged twice injuring the victim.

“He has no links to anything untoward. He is a well-respected family man.

“This has been a purposeful attack – he has been targeted. However we can find no motive for the attack at this stage.”

He said the only detail available about the gunman was that he was was dressed all in black and covering his face with a balaclava or ski-mask.

Police said a silver vehicle was scene speeding away from the area at nearby Meadowfield Drive around the time of the attack.

They believe it could be connected.

DS Jones added that the incident was “highly unusual” for the area.

He added: “Something like this has never happened around here in my 27 years of service and I want to reassure local residents that we are doing everything we can.”

Worried residents huddled in small groups outside the gates of Parsons Green Primary School a few seconds walk from the scene.

The road to the main entrance was sealed off by police as the investigation continues through the day.

One grandmother, Margaret Smith, 59, who has three grandchildren at the school – Arron, seven, Taylor, five and Eilidh, five, – said: “I was really shocked and scared when I found out what had happened.

“I thought the police would have closed off the school today given there is a gunman on the loose.”

“I know the guy involved – it’s a terrible thing to have happened.”

Another tradesman, who asked not to be name, added: “You never get this sort of thing here, not in Edinburgh -in the West maybe but not here.

Some residents of Paisley Drive were asked to vacate their properties while forensics examined the street.

Other shocked neighbours stood outside their homes waiting for news.

Martin Ivinson who lives a few doors down from from Mr Downing said: “I was asleep at the time and didn’t hear a thing – I was just woken up by the police.

“He is a family man and I can’t think why he would be targeted. And if it was just a random attack and not personal then that’s even more scary.”

Doreen Tait, 57, said she heard gunshots from her home behind Mr Downing’s.

She said: “I was woken up by two loud gunshots – my dog was going wild.”

“I didn’t think anything of it because I didn’t realise it was close to home. It’s really quite scary, nothing like this has happened around here before.”

Another neighbour, Gregor Todd, 44, added: “The guy’s windows have been smashed in.

“It doesn’t look like this was a random shooting.” 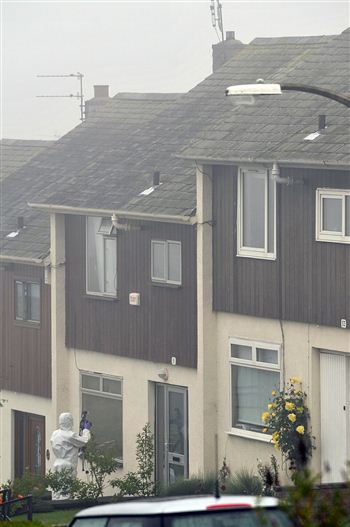 Mr Downing’s next door neighbour, who did not want to be named, said: “He got shot around midnight – I heard some commotion.

“He was shot in the groin.”

A neighbour on the other side of the Mr Downing’s home, who also refused to be named, said that he was recovering in hospital.

He said: “I’ve heard that he is doing OK in hospital, which is a big relief.

“But it’s still scary to think that this can happen to such a normal guy.

“This is a total bolt from the blue – Douglas is very nice man and we didn’t expect this at all.”

A receptionist said only: “I’m sorry – we’re not allowed to say anything at this time.”

The road remained sealed off last night as police appealed for information and continued door to door inquiries.

Baaarking: Meet Pet – The lamb who thinks she’s a Collie