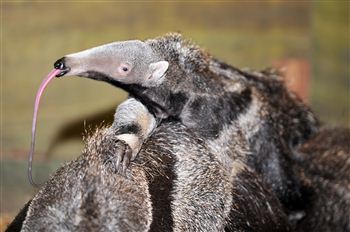 A CREATURE so dangerous that staff cannot go near enough to determine its gender is bringing hordes of visitors to Edinburgh Zoo this year.

The fluffy three-month-old giant anteater isn’t the most obvious fearsome predator to look at – but it’s sharp claws and aggressive attitude mean that staff keep their distance at all times.

But staff at the zoo didn’t even know the mother anteater was pregnant – because it’s too dangerous to get close to.

Their sharp claws can slash large predators like jaguars and cougars.

And they can even crush enemies to death with their muscular arms.

But Alison MacLean, Head Keeper of Carnivores, insists that despite having to feed them 30,000 ants a day – it’s still a pleasure to look after the anteaters.

She said: “This birth was particularly exciting for us – not only is it the first giant anteater to be born at the Zoo, we also didn’t know if the female was definitely pregnant.

“Mother and baby are both doing really well and have been spending a lot of time in their show den, much to the delight of visitors to the Zoo.”

The baby anteater is the latest addition to Edinburgh zoo after a busy year of arrivals.

Last month the zoo announced a record number of flamingo chicks has been born.

It has also seen the arrival of a pygmy hippo called Leishan and in April the staff welcomed baby gelada baboons and 43 penguin chicks.

But zookeepers know they can’t let their guard down around the fearsome creatures.

A 19-year-old Argentinean zookeeper died after she was mauled by a giant anteater at a zoo in Buenos Aires in 2007.