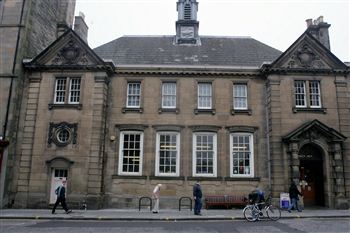 A CONTROVERSIAL million pound re-fit of a popular library which forced a family out of their home has finally been given the go ahead.

It follows a lengthy legal wrangle which saw council tenant Graeme Middlemass and his family lose a court battle with Edinburgh Council two years ago to stay put,when a Sheriff ruled that they had to leave the flat they had called home for 13 years.

The city council won the battle for rights over what was the last remaining council flat, a £200,000 two-bedroom property situated above the library, which used to be occupied by the caretaker before it was let to the Middlemass family in July 1994.

The council eventually agreed to re-house the family and pay Mr Middlemass compensation after the father-of-four had attempted to buy the property under the council’s own right-to-buy scheme, only to be blocked by council officials because of the flat’s unique setting.

Edinburgh Council has now advertised for a contractor to carry out the work and have set a closing date of August 28 for applications. Work is expected to begin almost immediately after the contractor has been appointed.

Their advert states: “The City of Edinburgh Council wishes to appoint an experienced all-trades contractor with engineering experience to carry out the refurbishment of Morningside Library in Edinburgh.

“The project comprises internal and external works including the installation of a new lift. The library fit-out will be carried out by a specialist supplier/contractor.”

Councillor Deidre Brock, Culture Convener, said: “Plans are progressing well for the refurbishment of Morningside Library and we anticipate work getting under way within the next few months.

“The revamp has been shaped by the views of library users who responded to a survey to find out what facilities they wanted to see in their local library. More than 800 people expressed their views, with toilets, seating and a cafe area topping the wish list.

“We are very grateful to all those who took time to complete the survey and look forward to creating a greatly improved Morningside Library which is truly fit for the 21st century.”

The total estimate to update the ageing library building is set between £500,000 and £1 million.

New facilities to be installed during the re-fit at the 100-year-old structure include new staff areas, a computer suite and a community meeting area.

The plush Morningside area is popular with students with Napier University’s Craighouse and Merchiston campuses nearby.

The much-sought after area of the capital also has other literary connections with it being the home of Muriel Spark’s Miss Jean Brodie character, and of Maisie from Morningside, a kitten in a series of books by Aileen Paterson.