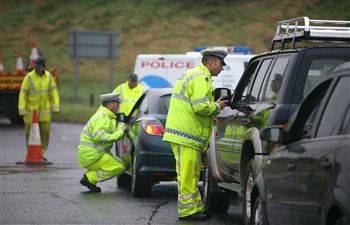 TORRENTIAL rain and flooding across parts of Scotland were feared to have claimed the life of at least one man today (thurs) – with forecasters warning of more bad weather to come over the weekend.

At least 20 rivers were last night subject to flood watches as heavy rainfall led to considerable train disruption and several key roads – including the A1 between Scotland and England – being closed to traffic.

In West Lothian police and RAF search and rescue teams spent several hours searching the swollen River Almond near Livingston after reports of a man falling into the fast-flowing waters.

A distraught member of the public called Lothian and Borders Police at 9am to say that they had seen the man fall into the river from a footbridge in the Kirkton area of the town.

Although there had been no immediate reports of anyone missing in the area, a helicopter was scrambled from RAF Kinloss to aid police and firefighters with the search efforts.

They were joined by specialist underwater search and rescue officers from Central Scotland Police at the winding river which had been subject of an earlier flood alert from SEPA.

At some points the level of the river surface was said to be only two metres from bridges spanning its depths.

A police spokesman said: “A full police search was launched this morning following reports of an unidentified person, possibly a male, jumping from a footbridge into the River Almond.

“The incident happened at around 9am, close to Simpson Parkway, which is located in the Kirkton area of Livingston.

“Police were immediately notified, and search teams were deployed along the river, which was swollen as a result of heavy rainfall in the area.

“In addition to police search teams, a helicopter from RAF Kinloss was deployed to assist in the operation, and further assistance was provided by the Fire and Ambulance Service.

“Despite a comprehensive search of the area, no body was recovered.

“Further searches will take place along the River Almond in an attempt to trace the body.”

Severe flood warnings were issued for the Rivers Tyne and Eye, while drivers were warned to beware of their speed and poor motoring conditions during peak times especially.

Flood watches were also issued for seventeen areas of Scotland including rivers in Central Scotland, the Borders and Highlands.

A statement from the Scottish Environmental Protection Agency said: “River levels are continuing to rise, and heavy and persistent rain will continue throughout today and into this evening.

“This may result in some localised flooding, and excess surface water making driving conditions difficult.”

The main A1 road linking Scotland and England was among those routes to be badly affected by flooding.

Police closed the road south of Torness, East Lothian, causing traffic chaos. There was further disruption and huge tailbacks between Grantshouse and Berwick.

One driver who was caught up in the floods said: “There was a huge traffic jam back from the roundabout at the Asda in Dunbar.

“Five police officers were going round the cars telling them the road ahead was shut and that we’d all have to take diversions.

“It’s about 25 miles of the road that is shut – all the way from Berwick up to Dunbar. There were traffic jams on a lot of the surrounding roads as people tried to get to where they wanted to go.”

The AA warned motorists to check for flood warnings before they go on any journeys and to take extra care if driving through any deep water.

A spokesman said: “If people are travelling through an area where they expect to come across flood water, they should inform the people they are going to meet that they may be late.

“This takes away any stress from the journey which might lead to risks being taken and the driver being swept away.

“When driving through any deep water go slowly so that you don’t cause a large swell behind you.

“Swells can cause damage to other cars.

“Drivers of 4x4s need to remember this particularly as they can cause considerable damage to other vehicles.

“When driving through flood water, people need to be careful that it isn’t too deep.

“You just need an egg cup full of water to get into the engine to break it so be wary of deep puddles.”

Trains running between Berwick and Edinburgh Waverley were suspended.

And there was little hope of any let up in conditions over the next few days.

Jim Watson, Public Weather Service Advisor at the Met Office said: “At the moment we’ve got flash warnings out covering the East of Scotland – it will certainly continue into tomorrow.

“We’re expecting a bit of a respite over the weekend, parts of Friday and Saturday. But on Sunday there is another weather system coming in, and we’re expecting more rain.

“Some places today we could well be seeing 60-70mm – around two and a bit inches, so quite a lot.

“It’s a typical pattern for the UK but with increased rainfall.

“August was very wet in south-west Scotland in particular – Dumfries and Galloway saw a more than twice the average monthly rainfall.”