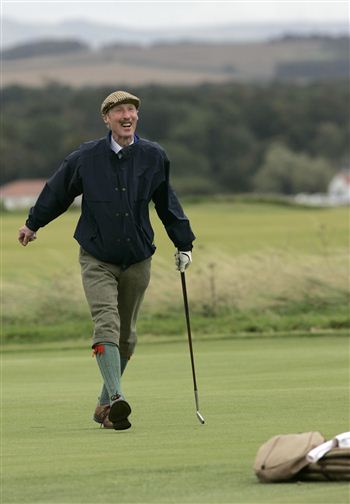 SCOTLAND played host to a PGA World Open Championship yesterday – with a twist.

Ditching their high-tech modern equipment, amateurs and pros alike donned plus-fours and wooden clubs to play the game like it was played in the 1930s.

With a £12,500 prize up for grabs, almost 150 competitors flocked to Gullane Golf Club in East Lothian for the PGA World Hickory Open Championship.

Players from all corners of the globe were represented, with Hickory champs from Germany and Sweden up against former PGA winners, including former Italian Open winner Dean Robertson.

Lionel Freedman, chairman and founder of the World Hickory Open, said that golfers were welcoming the opportunity to play the game as it was played 100 years ago.

Lionel, 75, said: “It gives them a different idea of the game – the clubs don’t hit the ball as far, so you have to think a lot more and plot your way around the golf course.

“It’s got better every year here, and most people definitely get into the spirit of it – including the professionals.

“The Americans and Swedes in particular are very keen to dress according golfing fashion as it was almost a century ago.”

“I think there’s a very high chance of this catching on a lot more; everyone that plays it finds it a lot of fun.”

More than fifty PGA and foreign professionals made the trip to the famously testing links course, which itself is more than 100 years old.

Beth Freedman, experienced golfer of more than 40 years and wife of organiser Lionel, said that hickory golf was a “wonderful” addition to a great sport.

Decked from head to toe in 1930s apparel, 72-year-old Beth said: “More and more people own their own hickory clubs, and I think it’s wonderful that this kind of golf is becoming really popular”

“My own round didn’t go too badly, I went round in about 70 – not bad, but I don’t think I’m in with much of a chance of winning.”

“Golf is a great sport – it’s such a social game that it extends beyond the sport, really.

“I’ve made so many friends while playing.”

The competition runs until today.