A COMPANY boss who sexually harassed his former receptionist has been jailed for faking evidence at the employment tribunal where she fought for compensation. 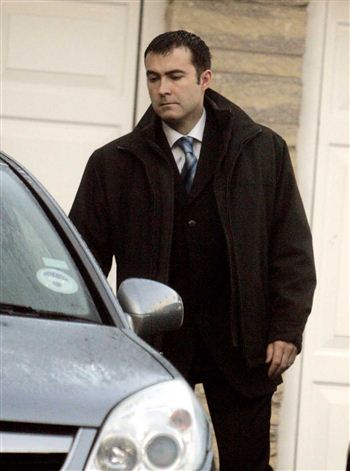 Jason Robinson, 36, made repeated and unwanted advances towards Susan Moffat while she worked at his drive hire firm.

The mum-of-three took the company director to an employment tribunal and eventually won almost £29,500 in compensation.

But Robinson presented fake documents – including a formal warning and contract of employment – at the hearing in a bid to dodge a pay-out.

Mrs Moffat’s forged signatures were on the documents which were passed to the tribunal held in Edinburgh.

After seeing the documents Mrs Moffat denied that she had seen or signed them and produced paper work with her real signature as proof.

The tribunal tipped-off cops and Robinson made a full confession when he was interviewed by them.

And at Edinburgh Sheriff Court the dad-of-one was jailed for four months after he admitted perverting the course of justice.

Sheriff Isobell McColl described Robinson’s actions as a “premeditated forgery” and said that it was among the most serious cases she had seen.

Fiscal depute Alexis Armit told the court how Mrs Moffat had been sacked by Robinson in June 2006.

Miss Armit said: “Mrs Moffat was employed as a receptionist at Robinson’s car hire firm between December 5, 2005 and June 10, 2006.

“During the employment she was paid her wages in cash and there was never a contract of employment produced or signed.

“After incidents between Mrs Moffat and Robinson, Mrs Moffat was sacked in June 2006.”

Mrs Moffat went on to take Robinson to an employment tribunal, which was held in Edinburgh in March 2007.

At that hearing Robinson represented himself and used a faked contract of employment as well as a faked formal warning letter on which he forged Mrs Moffat’s signature as productions.

After Mrs Moffat told the tribunal that the signature was not hers Robinson stopped turning up for the hearings and Mrs Moffat was awarded £29,500.

Robinson’s lawyer, Virgil Crawford, said his client had paid all the compensation to his former employee and that he now realised “the folly of his actions”.

Mr Crawford said Robinson’s wife was not expecting their second child and asked Sheriff McColl to consider community service rather than jail.

He added: “Clearly he was entirely foolish in his actions in producing false documents to the tribunal.

“What can be said for him is that he did not persist in matters after the criminality was pointed out to him.

“He did pervert the course of justice in relation to the procedure rather than the outcome.”

Mr Crawford said that although Mrs Moffat had been claiming just £1,750 in unpaid wages and bonuses, Robinson ended up paying £29, 500.

But Sheriff McColl said that the incident was among the most serious examples of perverting the course of justice that she had seen.

She said: “It was not incorrect, it was a premeditated forgery.

“I consider that this is one of the most serious cases of attempting to pervert the course of justice that has come before this court.

“Certainly that I have ever seen.

“Courts and tribunals can only make decisions based on evidence from true documents and fair statements.

“An attempt to influence the decisions by forging documents undermines the whole system.”

Sheriff McColl said that community service would not act as a strong enough deterrent to others and said she had to jail Robinson.

She said she had reduced a sentence of six months to four months because Robinson, of McNab Gardens, Falkirk, had admitted his crime.

Robinson wept as he was led to custody.