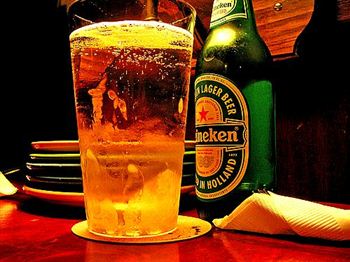 PLANS are underway to lower the Scottish drink-driving limit to make it less than south of the border.

Pub-goers would break the law driving after two pints under new rules which would see the 80mg per 100ml of blood limit dropped to 50mg.

The new rules would restrict drinking motorists to a pint of lager or large glass of wine.

The idea for the change comes after Northern Ireland environment minister Edwin Poots said he wanted the legal limit slashed.

SNP Highlands and Islands MSP David Thompson, who has campaigned on the issue, said: “The UK government has claimed in the past that Scotland’s limit could not be changed because it would be wrong to have different limits in different parts of the UK.

“That argument has been blown out of the water by Northern Ireland’s decision.

“If the UK government won’t do it, they should pass the powers to Holyrood as soon as possible. Saving lives is too important for parties to play political games.”

The Republic of Ireland Transport Minister Noel Dempsey said the legal limit there would be lowered by the end of this year.

If successful, the UK and Malta would be the only nations in the EU with a higher drink-drive limit.