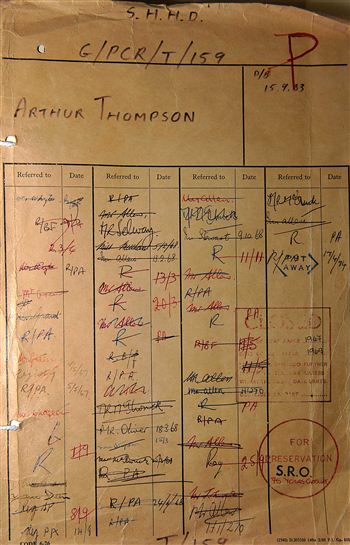 CRIME boss Arthur ‘The Godfather’ Thompson masterminded a reign of terror across Scotland’s prisons even after he was jailed.

Chilling declassified documents released yesterday after 40 years outlined how the Glasgow gangster threatened, manipulated and even paid other lags to do his dirty work.

They describe Thompson – who ruled Glasgow’s criminal underworld for decades – as “one of the most dangerous we have serving”.

Thompson served some nine-and-half years between 1951 and 1969 alone during various sentences over extortion, violence and even explosives charges and even a major heist on a clothing store.

But in a string of reports, wardens warn that Thompson’s “veneer” of pleasantness concealed his evil agendas.

The documents detail his intimidation, extreme violence and full-scale disobedience in seven prisons across Scotland with parole officers cautioning his return to life on the outside.

One prison governor at HMP Aberdeen described Thompson in a report.

He wrote: “His depravity is veneered with conformity, deadly quietness… difficult to undermine when he is on the alert – he is a consummate villain.

“It is well known that Thompson and (an unnamed inmate) are thugs of the worst kind and run warring factions inside and outside of prison with the blind hatred of their kind.”

He continues describing Thompson’s attempts to bring about full-scale disobedience through fear.

The prison boss wrote: “He used his powers for thuggery to press-gang 32 other prisoners to petition for open visits.

“And yesterday at the orderly room (an unnamed prisoner) requested to be placed into protection as he was being forced by Thompson to stab (another unnamed inmate) and that if he didn’t he would get done himself.”

Henchmen were paid in tobacco

Another report by a prison warden at the same jail noted that Thompson’s henchmen were paid in tobacco depending on the how vicious their attacks on others were.

To ensure attacks were particularly savage Thompson would give them a bonus of 11oz of tobacco.

The documents, which were originally due to be released after 75 years, tell how wardens lived in daily fear of a prison break.

The same governor wrote: “Word was received from Mr Menzies that there might be an attempt from the outside to spring Thompson from prison, no attempt transpired though his visitors were here in force.”

Another file tells how commonplace violence was during the rule of Thompson at HMP Aberdeen.

While Thompson usually stood in the background during violence, one report highlights the rare occasion in April 1969 when Thompson savagely attacked inmate William Gribble.

Gribble was treated for cuts around his blackened eyes as well as a “ragged cheek wound” described by one warden as “a one-and-a-half inch cut along his cheek – quite open”.

Thompson later served time in Barlinnie where he clashed with other gangs before his eventual release.

The career criminal born in 1930 attempted to portrait himself as an honourable family man being married with four children.

In reality their family life was different and his wife, herself serving three years in prison, even wrote a letter to his prison governor noting how well behaved he was and pleading for him not to be sent to Barlinnie.

She feared for his safety from rival gang members and told the governor: “He was told he may be sent to Barlinnie to be liberated and he doesn’t want this as he fears he may be involved with the wrong type of people.”

At his parole board meetings officers repeatedly warned of the danger of releasing him.

One warned: “He is pleasant, cunning – but Thompson is one of the leading criminal lights in Glasgow with connections in London.

“And one cannot take him at face value.

“Thompson will inevitably return to his lucrative club management and his position as a leader of the Glasgow criminal fraternity.”

Thompson survived numerous attempts on his life – in 1966 a bomb exploded in his car, killing his mother-in-law.

He walked away unscathed but in1988 he was shot in the groin outside his home.

Three years later, a car mounted the pavement outside his home and ran him over.

His early wealth came from protection rackets but the family truly began to prosper during the Eighties when it moved into the heroin trade.

As money rolled in, the family converted its council home into a palace, buying the properties either side and knocking the three together into a luxury fortress known as the Ponderosa.

His son, Arthur ‘Fat boy’ Thompson Jnr was murdered outside his home in 1991 and Arthur Snr died of a heart attack 18 months later.