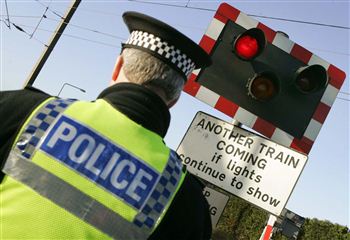 A MAJOR crack down aimed at preventing deaths on Scotland’s level crossing network was launched yesterday.

It comes just months after an elderly couple died in a horrific smash at an unmanned site last September.

Angus MacKay and his wife Margaret, both 81, and Mr MacKay’s brother Donald, 66, were killed at the crossing – which has warning lights but no barriers.

And earlier this month a van crashed into the side of a train near Halkirk in Caithness, on the line between Georgemas and Thurso.

The new purge on drivers was accompanied by a high profile launch at crossing points across the country.

British Transport Police (BTP) stopped drivers to give advice on using the crossings as part of Operation Galley.

Sue Maxwell, police inspector at British Transport, said: “This is about prevention – what we don’t want to be doing is sorting things out after the event.

“It has been well received by the motorists we have spoken to and although it’s a small number of people who do break the rules when it goes wrong it causes a huge impact on the community and the railway.

“This is a big campaign but we hope that it will get the message across.”

Politicians have called for tougher safety measures for the 128 unmanned, open crossings in the UK – 23 of which are in Scotland – which have warning lights and sirens but no barriers.

Last year the Office of Rail Regulation laid out proposals for improving safety at level crossings which included increasing penalties for motorists who break the rules.

Craig Bowman, from Network Rail, said: “We are always trying to raise awareness – the key message from us is just to stay behind the barrier until the lights have stopped.

“There are incidents which are very high profile but there are thousands of cars that cross the tracks safely every day.

“Most drivers that we speak to are aware of the rules – it’s about measuring that element of risk and how much money it’s worth spending on level crossings.

“Our long term goal is to try and close as many level crossings as we can.”

In 2009 Scotland’s BTP officers dealt with 185 offences for failing to obey a road traffic sign.

More than 50 per cent of the offences led to drivers facing a report to the local Procurator Fiscal.

George Lyon, Liberal Democrat MEP for Scotland, has stepped up his efforts to make Scotland’s level crossings safer in the wake of several accidents in the past year.

All but two of Scotland’s 23 open, unmanned level crossings are in the Highlands and Mr Lyon has called for action from the European Commission to address these crossings.

“Looking at the experience in other European countries can inform the range of solutions we need.

“There is already strong evidence that low winter sunlight adds to the hazard at open crossings.

“That is a particular problem facing the Highlands and one which can only be adequately addressed by automatic barriers.

“I hope Europe will play a part in making that possible.

“The European Level Crossing Forum will hold workshops across Europe from spring this year and I want Scotland to be at the heart of those discussions.”