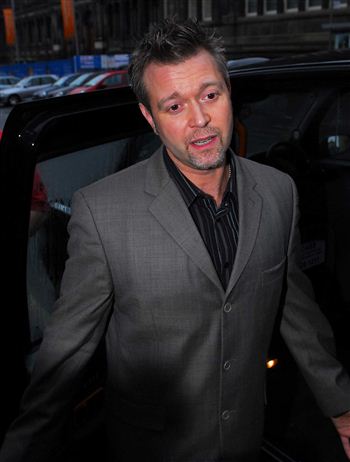 FADING stage star Darren Day has been banned from the roads after police caught him drunk behind the wheel of a Mercedes.

The 41 year-old was said to have smashed the car into a lamppost at 4am a week before Christmas in Edinburgh, where he was performing in the Queen-themed We Will Rock You stage show.

But today (Wednesday) prosecutors dropped the crash charges when Day confessed to having 58 microgrammes of alcohol in his breath – nearly double the drink-drive limit – when arrested in the capital’s Manor Place.

Day – who appeared in the first ever I’m A Celebrity Get Me Out Of Here jungle gameshow – also admitted failing to stop to give his name and address to police.

He will however stand trial over claims that the police who arrested him found him in possession of a Kubotan keyring weapon.

Hanging his head in the dock, Day simply said “Yes I am” when asked by Sheriff James Scott whether he was pleading guilty to two of six charges.

But Day’s lawyer Robert Frazer said: “The vehicle is in fact owned by a third party.

“I am not prepared to stand trial on Thursday.

“Mr Day originally appeared on December 18 so there has been an extremely short time to prepare.”

Now Day will stand trial over the weapon possession charge on February 10, when he will also be sentenced for drink driving.

The former television presenter’s arrest left theatre staff sweating over whether he would make it to the sold out show on time.

Now that the Queen musical is over, Day has left his temporary Edinburgh residency and was bailed to an address in England.

Police seized the Mercedes he was driving and remains impounded by the Crown pending Day’s sentencing next month.

His string of dates with fellow low-level celebrities earned Day the dubious accolade of Britain’s number one love rat.