Sexual predator back in court for frightening boy 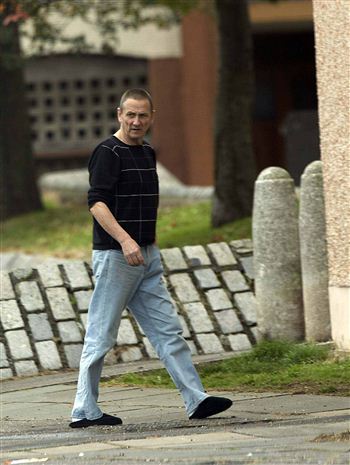 A CONVICTED paedophile who once groomed a teenage actress from the Harry Potter films has insisted he is “not evil” after scaring a nine year-old boy to tears.

Ex-squaddie Douglas McNaught is banned for life from speaking to children having served a six year jail term for a sex attack on a young girl.

But the 61 year-old has admitted breaking the terms of a Sexual Offences Prevention Order less than a year after it was imposed.

He left the boy terrified after a pouncing on a chance encounter in the street last September.

The youngster – who cannot be named for legal reasons – was innocently playing with friends in Edinburgh’s Prestonfield area when he asked McNaught why he was fixing his car.

McNaught told the lad his car was broken, and the boy carried on playing with his pals.

But seven hours later the unemployed pensioner – who had just bought a new motor – saw the same youngster again standing at a bus stop.

“The boy was upset”

Ignoring his lifetime ban from speaking to kids, he drew his car to a halt and shouted over to the boy.

The child told police he was so tearful and scared of what might happen that he didn’t remember what was said.

Fiscal depute Melanie Ward told Edinburgh Sheriff Court yesterday (Tuesday): “The boy was upset having been approached by the man he had seen earlier in the day.

“His impression was that clearly the accused was attempting to do something which he was uncomfortable with.

“There appears to be no sexual element to this.

“But clearly the approach is deliberate and the boy looks his age, there could be no mistake about that.”

Later that night, McNaught’s house and car were attacked by angry locals after hearing the sex offender was in trouble with police yet again.

His sickening history was fresh in many locals’ minds having hit headlines for moving in with 16 year-old actress Louise Stewart, who had roles as a stand-in in 2002’s Harry Potter and The Chamber Of Secrets and as an extra in 2004’s Prisoner of Azkaban.

Hounded out of his home

She was reported to have moved back to her parents’ home as soon as she found out about his past.

It had also emerged that he had carried out a two-year campaign of abuse against the underage girl he was jailed for attacking in 1993.

As a result, McNaught left Wester Hailes and moved across the city to Prestonfield.

But his spell there was short lived, according to his defence agent Rhona McLeod, who said locals hounded him out on hearing a child had reported him to police.

She said: “He says he told the boy something along the lines of ‘this is what happens when your car breaks down.’

“This wasn’t meant to cause distress and he is now fully aware of the terms of his order.

“It hadn’t been done deliberately and was not with an evil intent, but he accepts the court will be concerned with this.

“His house was attacked that night and he had to change address.

“We don’t know exactly what happened that night.”

Police confirmed at the time that they had concerns for a registered sex offender in the Prestonfield area and had “assisted in re-housing” him after his car and house windows were smashed.

Sheriff Neil MacKinnon called for background reports and ordered him to return to court next month for sentencing.