FIRE-FIGHTERS paid tribute to fallen hero Ewan Williamson at an emotional service to mark the first anniversary of their colleague’s death in Edinburgh yesterday.

Lothian & Borders Fire & Rescue Service chief fire officer Jimmy Campbell – in his first day in the job – led tributes to the 35-year-old who died rescuing people from a blaze at the Balmoral Bar on Dalry Road last July.

Joined in laying a wreath outside the brigade’s HQ by Convener of the Fire Board Mike Bridgman, Mr Campbell said:  “It’s been a difficult year for the service.

“This wreath is being laid in memory of Ewan – it’s to remember Ewan’s family, his friends and his work colleagues.

“This was a very emotional day for the service. It’s a year on since we lost Ewan Williamson and it was a time for us to come together.

“I didn’t know Ewan personally – this is my first day with Lothian and Borders.

“But I know all about him.

“I know he had a tremendous and infectious effect on the watch he worked with.

“He was a very reliable and top class fire-fighter who often kept the whole watch going.”

Earlier his colleagues had visited the scene of his death before Green Watch joined over 50 other members of the brigade for a minute’s silence outside the service’s headquarters on Lauriston Place, Edinburgh.

Rob Donaldson who worked with Ewan at Tollcross Fire Station said that Green Watch had had their own private memorial earlier in the morning.

Mr Donaldson said: “We have been back to the Balmoral Bar this morning and had our own private service.

“This is the opportunity for everyone in the whole of Lothian and Borders to pay our respects and remember Ewan.

Mr Donaldson also talked about the effect Ewan’s loss has had on the members of the service. 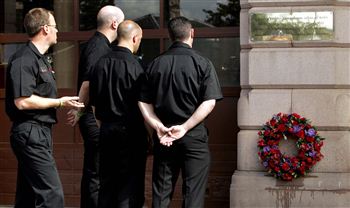 He said: “It has been a hard year.

“Ewan is a great loss not just to the fire service but also to his family – he was a major part of Green Watch.

“He was fun loving and always put a smile on our faces.

“The members of Green Watch will never, ever forget Ewan and when thinking back there will always be a smile on his face.”

Ewan’s mum Linda and his sisters Rebecca and Rachel weren’t at the service as they held a private memorial for him at home.

They honoured the 35-year-old who died rescuing people from a blaze at the Balmoral Bar on Dalry Road last July.

Although around 20 people were evacuated from the building, Ewan tragically lost his life – the first Edinburgh based firefighter to die whilst battling a blaze.

He has been nominated for a special bravery award, while a report into the circumstances of his death is still to be published.