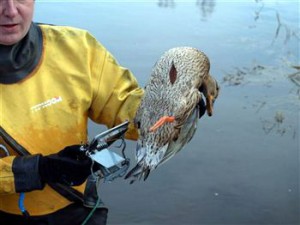 TWO ducks had to be put to sleep after their legs were almost completely severed by illegal rabbit traps.

Inspectors of the Scottish SPCA found one of the poor creatures at Davie Park duck pond in Blairgowrie, Perth and Kinross on Monday 10 January.

The duck was found in the pond with a fenn rabbit trap attached to its leg and had to be put to sleep to end its suffering.

The following day inspectors received call reporting another duck who had suffered the same fate.

The Scottish SPCA is now appealing for any information to help find the culprit.

Chief Inspector Brian Cowing said: “These traps were set illegally as no permission has been given by the local council and they were not secured to a fence or set in a tunnel, which are all legal requirements when setting fenn traps.

“The traps are a serious concern as many local people visit the pond to feed the ducks and if the traps are set at the water edge, they could cause someone a bad injury.

“We don’t know why anyone would set traps in this area as it is a public place.”

Anyone found guilty of causing an animal unnecessary suffering can face a fine of up to £20,000, up to 12 months in prison or both.