Pram ban, get off the bus ma’am

A MILITANT mum brought a city bus to a standstill after refusing to be ordered off a bus by the driver.

Kelsey Bryce, 20, refused to leave the vehicle in Edinburgh after the driver told her it was against the rules to take little Ryley’s pram on board.

A ten-minute stand-off followed between the driver and an equally stubborn Kelsey. 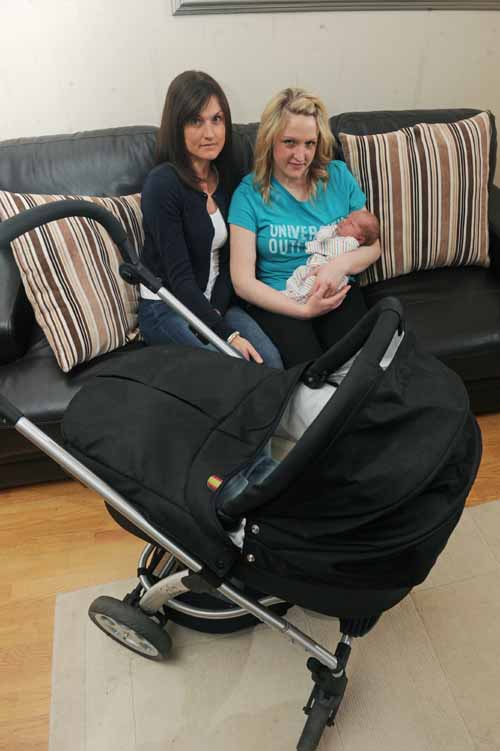 The row only ended when the driver announced to passengers that he was cancelling the service and ordered passengers off the bus.

Kelsey finally admitted defeat and she and her aunt, Lynsey, decided to take a taxi home to avoid disrupting other people’s journeys.

The young mum had been enjoying her first outing with seven-day-old Ryley and claims she was able to board the same Lothian Buses 22 service into town without a problem earlier the same day.

But the driver of the return bus from the city’s George Street refused to allow her on board with the pram.

She said: “It’s ridiculous. My sister Lara used this exact pram on the number 22 for the past 14 months without any problems.

“The driver was very rude, he just took one look and told us that we weren’t allowed on. He ruined what should have been a special day for me.

“I’m sure that we would have resolved the issue if he had been a bit more polite. The buggy is collapsible and neither of the wheelchair bays were being used. He never even asked me though, straight away he said ‘no’.”

The bus firm has clashed with mums in the past as their rules say  prams which fold can be brought on to buses in case the space is needed by a wheelchair user. The policy is intended to make sure the company complies with disability laws.

A campaign by The Babies on Buses action group led to special spaces for mums with buggies being introduced on some routes, but the 22 service still requires them to be able to fold.

Kelsey’s aunt, Lynsey added: “There seems to be no consistency, how can one driver look at the pram and deem it OK but another just a couple of hours later decides it’s not OK? The guy was just being a complete jobsworth. He cancelled the service over the Tannoy in the hope of getting all the passengers against us but they weren’t; they were telling us that we were dead right.”

Ian Craig, managing director of Lothian Buses, said: “Lothian Buses has not had an opportunity to speak with the driver in question and review the CCTV footage and audio on the bus so cannot comment on this isolated case.

“This is being investigated but our company policy and rules of carriage state that only foldable buggies are permitted on our buses. We are reviewing our current accessibility policy, the findings of which will be announced shortly.”