WOMEN should be shown scans of their unborn child before having an abortion, claims the leader of Scotland’s Catholic Church.

Cardinal Keith O’Brien, the Archbishop of St Andrews and Edinburgh, has said he wants NHS bosses to introduce the American-style measure to reduce the number of terminations in Scotland.

Currently around 200,000 abortions are carried out in Scotland every year and anti-abortion campaigners feel the procedures will help persuade women not to go through with the abortion after seeing how far developed their babies are. 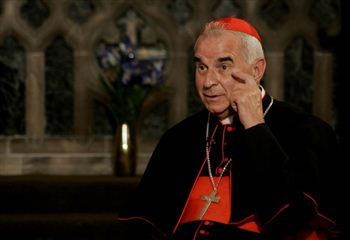 Cardinal Keith O’Brien said scans could cut down the number of abortions in Scotland.

However opponents say the measure would be a violation of women’s rights, as well as doctor – patient relationships.

In America, Virginia will soon be the eighth US state requiring women to receive ultra sound scans and descriptions of the foetus.

Under the “right to know” law, woman planning an abortion are also given information on alternatives to termination and medical facts on the risks involved.

Cardinal O’Brrien said: “A large number of US states have recently passed legislation offering detailed information such as ultrasound scans and a variety of printed matter.

“While viewing or reading this material is not compulsory and a woman may decline to do so, the fact that it is offered shows a commitment to informed consent which is lacking in the NHS.

“A right to know approach empowers women and enables them to make an informed decision. It is unjust and unethical of the NHS to deny crucial medical information to women this way.”

O’Brien said there was a “shocking” absence of informed consent in dealing with abortion issues in Scotland.

He said: “If a woman has a cataract removed or a hip replaced the potential dangers are described to her in advance. If she has an abortion they are not”

She said: “We do not want to see a situation like this in the UK where a women’s right to choose and access this procedure is gradually eroded. Women invariably know whether it is the right time in their life to have a child and the decision to choose to terminate a pregnancy must be theirs to make without any further barriers being introduced.”

Currently organisations carrying out abortions provide women with counselling, though some critics warn this advice can be biased.

A Scottish Government spokesman said: “The number of abortions carried out in Scotland has reduced year on year over the past few years.

“This is a trend we wish to see continue and that is why we are investing in sexual health services and prioritising access to effective contraception for women. Women seeking abortions in Scotland are subject to assessment by two NHS doctors and already receive balanced information about the procedure. We have no such plans in Scotland regarding scans.”

O’Brien’s comments come on the 15th anniversary of the Glasgow –based Cardinal Winning pro-life initiative which offers help in kind and financial support for women facing crisis pregnancies.

Sister Roseann Rweddy, who runs the initiative, said about 120 babies are alive today who would have been aborted without the services.

THEATRE – Crowned with Glory and Honour