The Royal Navy’s duty search and rescue Sea King yesterday went to the aid of a man trapped beneath an overturned tractor.

Called at 9.01am, the HMS Gannet helicopter based at Prestwick was airborne at 9.10am and on scene at the farmland near Straiton in Ayrshire by 9.23am.

On arrival at the farm, the duty team was able to winch two crew members down to the area to join Strathclyde Police, Scottish Ambulance Service and Strathclyde Fire and Rescue officers who were already on the scene, before landing the aircraft close by. 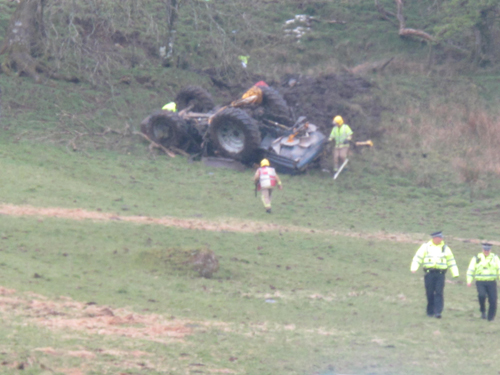 HMS Gannet arrived at the scene just after 9am.

The man was clear of the vehicle when the helicopter arrived.

His injuries were unknown and, considering the weight of the tractor, it was feared that  they were serious.

For this reason the decision was made to transfer him rapidly by helicopter to Ayr Hospital where he could be expertly assessed as quickly as possible.

Petty Officer Taff Ashman, HMS Gannet’s duty paramedic, said: “It looked like the tractor had slipped on mud and then capsized – it all looked quite nasty.

“Since we weren’t able to determine the scale of his injuries in situ, it was vital to get him to specialist care as quickly as possible, and the helicopter was by far the most rapid way to achieve that.”

Departing from Straiton at 9.40am, the Gannet Sea King was on the ground at Ayr Hospital by 0946.

A spokesperson for Ayr Hospital has today described his condition as stable.

“I’d say it’s pretty amazing,” continued Taff. “The tractor was in quite a mess, so I’d say he’s been fairly fortunate.”