A SCOTTISH marathon has caused red faces all round – and not because of the physical exertion involved.

All 23,000 runners in the Edinburgh Marathon were rewarded for their 26-mile effort with an official medal that looked alarmingly like…six inches.

The phallic-shaped awards have become a laughing stock on social networking sites where dozens of pictures have been posted by winners in suggestive poses. 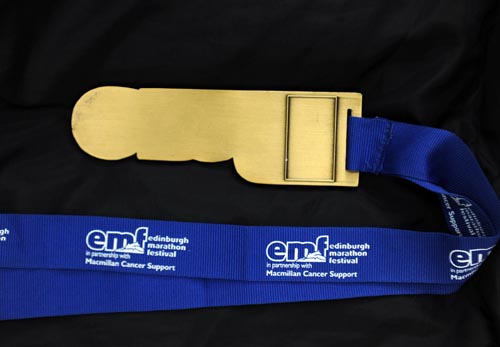 The phallic-shaped medal has become a laughing stock.

The medal features the letters EMF against the backdrop of Edinburgh Castle.

But the plain rear side of the medal has a distinctive outline which has been causing sniggers ever since Sunday’s run.

Ali Wright, 31, from South Queensferry, who ran in the Cockenzie to Prestonpans leg of the relay – officially known as the Cock and Pan leg – wrote: “Little did I know the prize for that would be symbolic.”

Another runner said on Twitter: “I saw one today and if you turn it round so the plain back is facing forward, the resemblance is uncanny.

“Everyone who did the marathon was talking about it.”

Another athlete, Andy Goodson, who came up from Essex to compete, added: “My first impression of the medal was that it was a weighty piece of race bling,” he said.

“When I had recovered enough to look at the medal, I realised it was somewhat phallic in shape.

“Turning it around caused anyone nearby to notice it as well. I am a little surprised nobody saw the potential issue, especially as it is designed to have your time added to the back. Someone must have looked at it from that side before it was commissioned.

“A friend said she noticed its shape straight away and many people in the park and on Twitter have noticed the similarity to reproductive organs. I took it to my running club back home and they all laughed.” 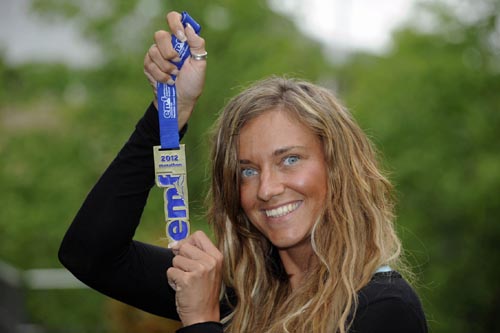 A gold version of the medal was handed out to everyone who competed in the full marathon, with a silver version given to those who ran the half marathon and relay.

Edinburgh Marathon Festival director Neil Kilgour, said no one had noticed the medal’s phallic qualities during its design process.

He said he expected organisers would be hearing jokes for years to come. The design medial “included detailed measurements,” he said, but no-one had noticed the potential for embarrassment.

He added: “It is too early to say whether there will be a redesign of a medal for 2013.”

In 1991 the SNP were forced to rethink its party logo, after a newly designed symbol was found to resemble a swastika when turned upside down.

The Iranian Government threatened to boycott the London 2012 Olympics after becoming convinced the Games logo spelled out the word Zion – a biblical term for Jerusalem – and was part of a pro-Israel conspiracy.

Earlier this week, BBC News was forced to apologise after broadcasting the logo of the fictitious United Nations Space Command from computer game Halo in place of the United Nations Security Council.