Edinburgh Airport has unveiled the centrepiece of its new plaza – a huge 27 metre sign spelling out Edinburgh.

The massive letters stand at the airport’s new ‘front door’ and links the east extension directly to the tram stop.

Over 475 tonnes of asphalt and 70m3 of concrete were used in the creation of the 2000m2 space which links the tram stop directly into the airport terminal. 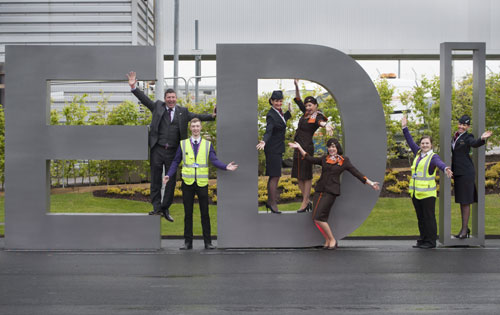 He said: “This area has been a bit of a building site over the last few months, and there are still a few tweaks to be made, but I’m delighted we can finally unveil our new plaza.

“Thousands of people will be travelling through this area so we really wanted to give people a sense of place, creating a pleasant environment where they can relax before carrying on with their journey.

“Our teams have been exploring different ideas for what we could use the plaza space for. We’re working on lots of exciting plans, from alfresco dining and coffee shops, to a full-blown art and entertainment venue.”