AUTHOR and television presenter Neil Oliver has been driven off Twitter by “vicious” Scottish nationalists who have said he deserves “to be burnt as a traitor”.

The TV archaeologist, know for presenting Coast and A History of Scotland, says he deleted his account after receiving “hate-fulled messages”.

Oliver, born in Renfrewshire, became a target for nationalists in May, when he wrote a newspaper column condemning Alex Salmond and the independence movement.

In his column, Oliver called Salmond “a big, round wrecking ball of a man, shaped only to do damage” and called the independence referendum a “hate fest”.

Oliver says that he is now worried for his children, who are growing up in a time where social media will dominate their lives.

Commenting on the hate he received after the publication of his column, Oliver wrote: “A great chunk of the response was not just negative but very personal and filled with bile and vicious loathing.

“People made it clear they wished the worst for me. They wished that I would develop cancer and said I deserved to be burnt as a traitor. It was one or two positive comments accompanied by hundreds of hate-fuelled messages.”

He added: “It just got to the point where I was getting so much abuse that I woke one day and thought, ‘Why am I bothering having this intrusion in my normal life?’ Forty thousand Twitter followers was a sacrifice worth paying.”

In wake of the stress it caused him, Oliver also expressed concern over the future of his children, who are growing up in the social media era.

He said: “It bothers me that when my wee girl comes home from school she can’t leave school behind in the way that I did. Now school follows children around and is pinging by their beds as they try to get to sleep.”

In his column in May, Oliver attacked the Scottish National Party, writing: “The SNP are in the dead dog business. I’m old enough to remember when they were a joke. Somewhere along the line something truly awful happened and the SNP became the only joke in town, and it was on us. It was all over us and all over the country.”

He then attacked the prospect of a second referendum, writing: “I have two issues with [Salmond’s] more recent pronouncement – and with Nicola Sturgeon’s promise that she herself will choose the date for a second hate-fest”.

Finally, he directed criticism at Salmond himself, saying: “Salmond is a big, round wrecking ball of a man, shaped only to do damage.”

He added: “He and his sort – Sturgeon and the rest – fail even to comprehend what it is they behold and despise.”

The article resulted in many personal attacks being directed towards Oliver on Twitter. 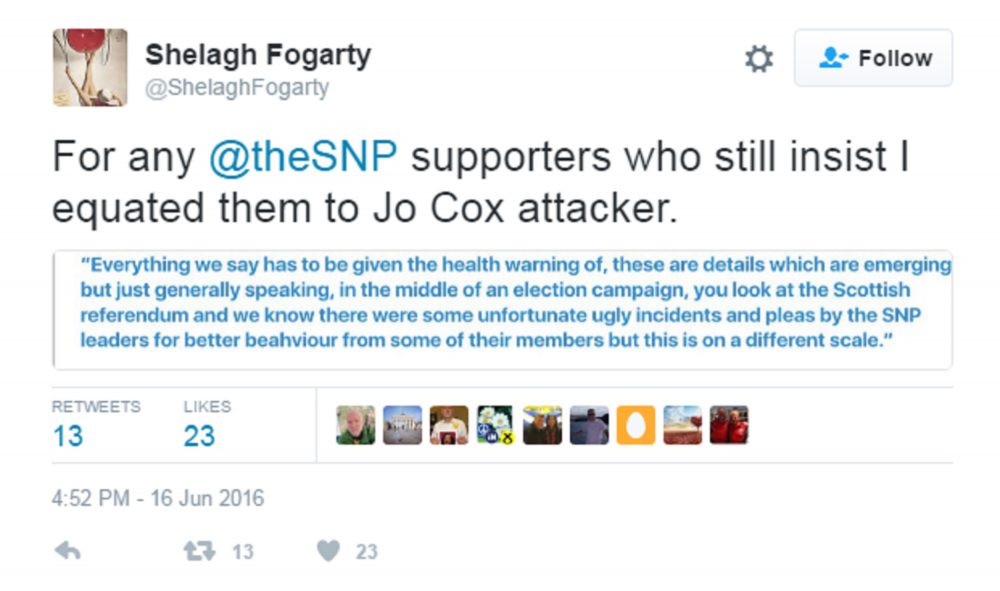 One user called the piece “the rantings of an extremely unwell man who should seek medical help immediately.”

Another said: “He lost the plot years ago when he got famous. He’s worried his big money will dry up.”

All these high-profile cases have come after Nicola Sturgeon told supporters of independence to stop abusing ‘No’ voters online in October last year.