A DISTURBING video captures the moment a vicious fight breaks out between two schoolgirls – inside a classroom.

The brutal brawl is thought to have broken out during an English class at Eastwood High School in the affluent town of Newton Mearns, East Renfrewshire.

The footage shows the young girls verbally abuse each other before the pair launch themselves together as chairs and desks go flying around the room.

The girls grab each other’s hair and end up sprawled on the classroom floor before fellow a pupil and the teacher manages to break them up. Bizarrely, a pupil strolls past the fighting pair at one moment to take her seat. 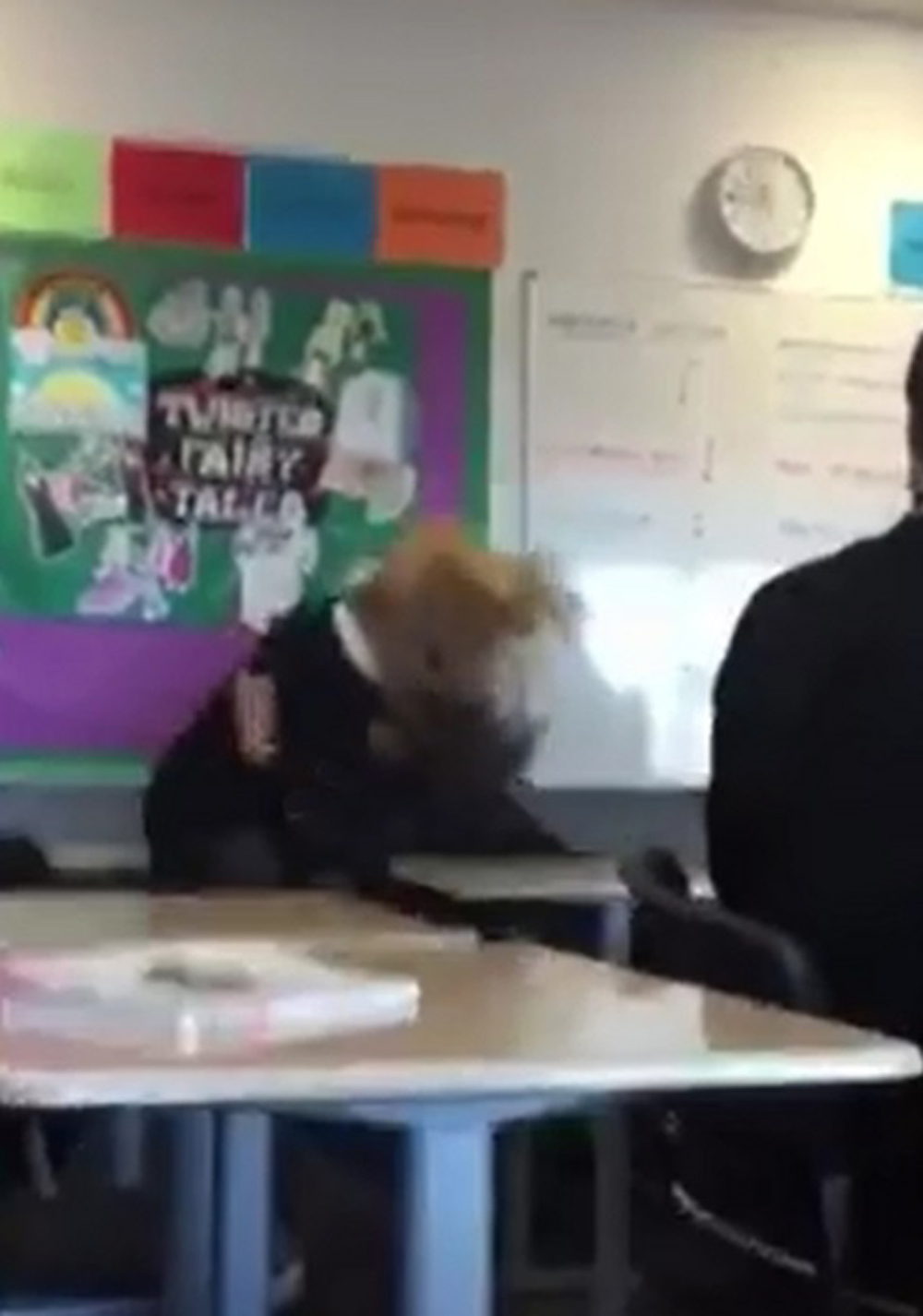 The footage ends with the teacher sending the girls downstairs, presumably for a meeting with the head teacher. One of the girls appears to picks up her blazer before leaving the room.

The minute-long clip, which was uploaded to a Facebook page called Glesga Vines and Videos, appears to have been filmed by another pupil with a mobile.

It starts with the two girls in mid-argument, as their shouting voices are heard above the noise in the rest of the classroom.

The female teacher then asks: “What are you getting annoyed about?” The response comes: “Her, she’s a dirty, little cow, I hate her.” 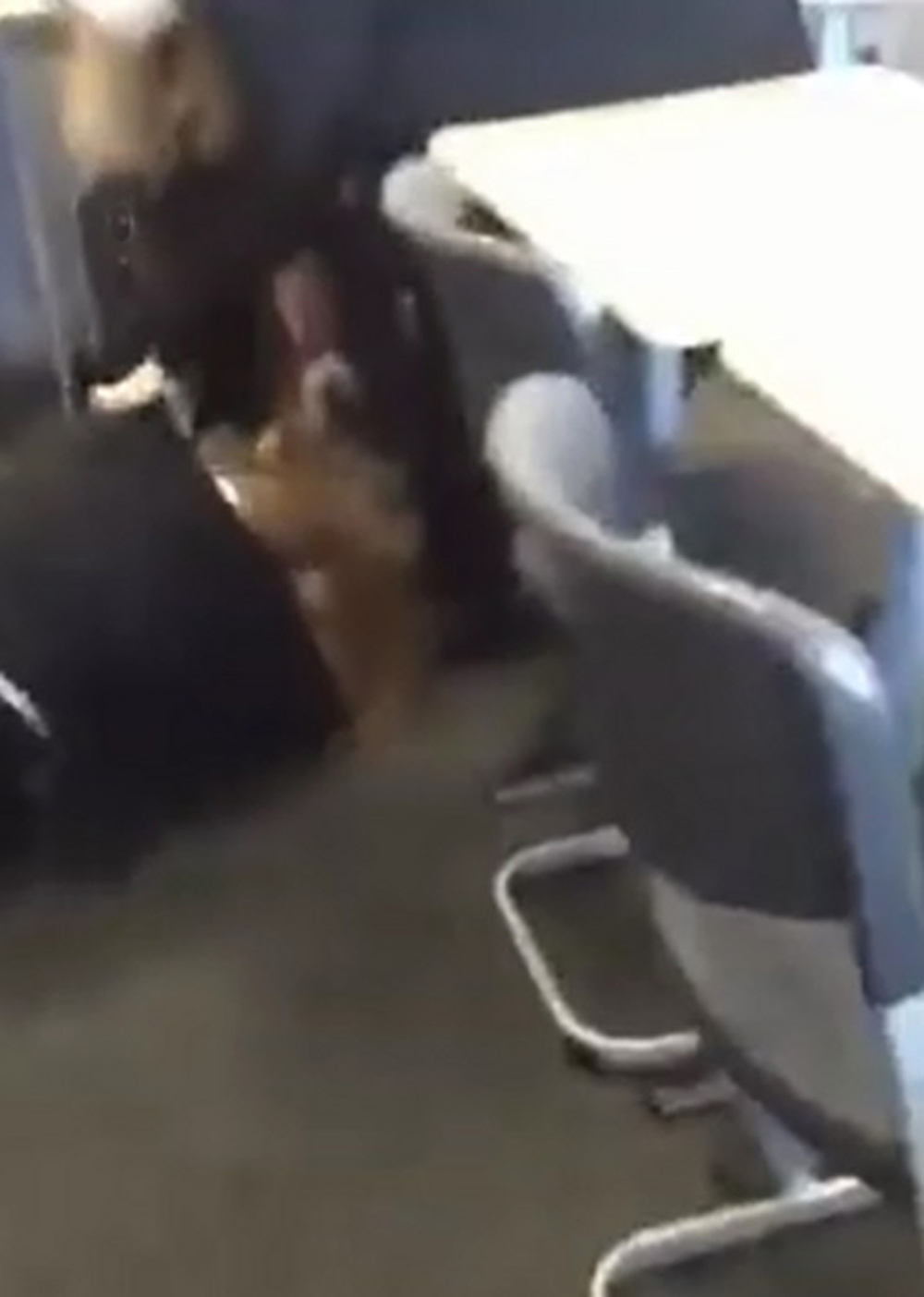 The teacher then says: “Right, you’ve clearly upset her but if you could try and watch your language.”

The girl then points and says: “It wasn’t even me, it was her. She’s the one who told me to f**k off and thinks it’s okay.”

The other youngster, enraged, then says: “I told you to f**k off. Who are you speaking to?”

Bedlam then ensues in the classroom, as one girl leaps up from her seat and launches her desk forward and viciously grabs the other’s hair, repeatedly yanking her hair forward. 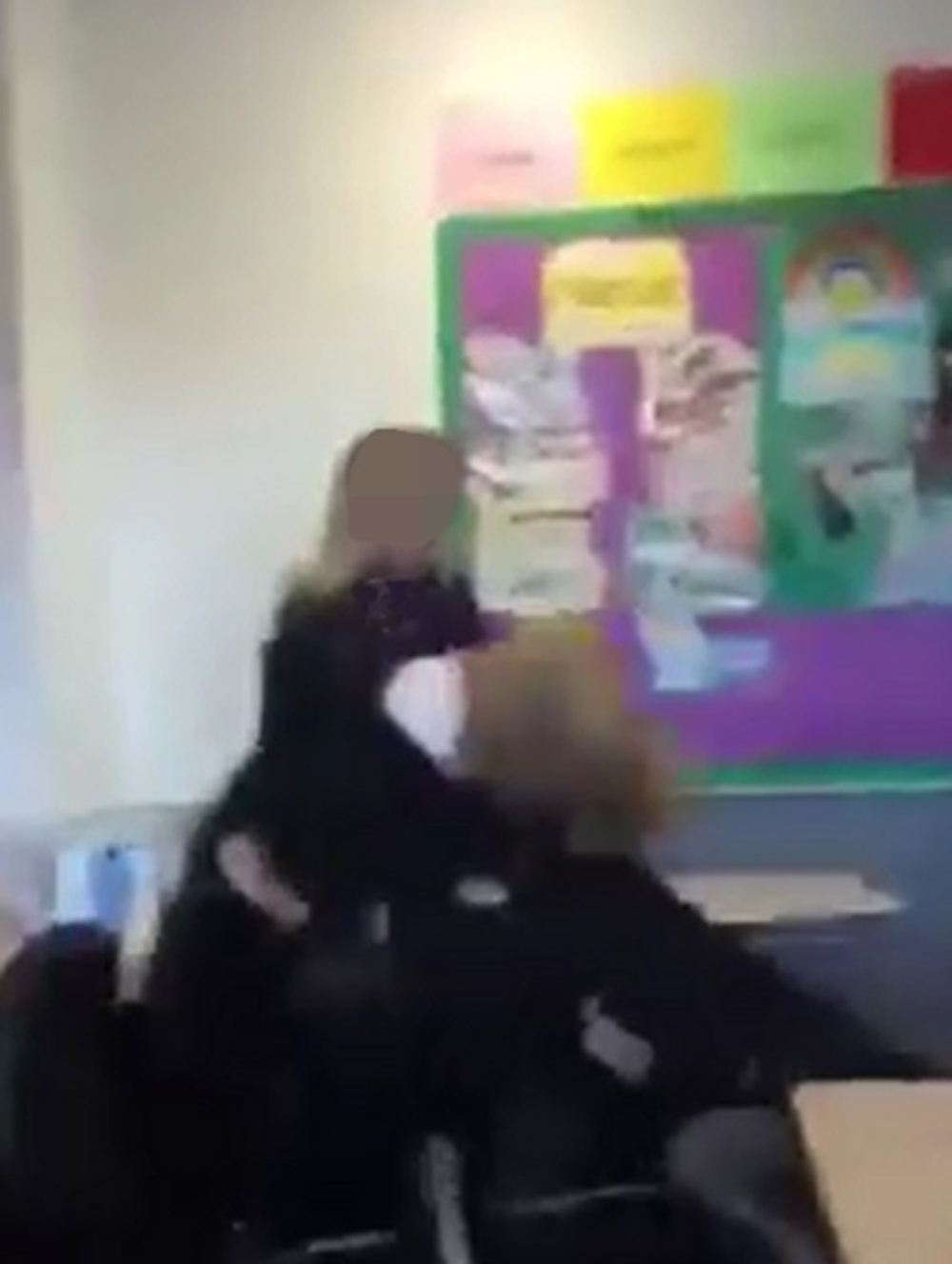 The girl then fights back by pushing the other girls forward in a rugby tackle movement before they slam into a desk at the back of the room and fall to the floor.

As they tangle on the ground, the teacher comes over to try and separate them along with another pupil and says: “Enough, both of you.”

The pair eventually stop as the teacher tells them to “get their feet down”, before they both stand up and collect their stuff as they’re sent “downstairs” to see the head teacher.

Kelly Harkness wrote: “So disgusting, thìs is my kids’ school. No way to speak to teachers and definitely should not be acting like this in or out of school, girls or boys. Awful.”

Sarah Taylor commented: “This is Eastwood and that’s my English teacher!”

Notable former pupils of Eastwood High include, Kelly Macdonald, who starred in Trainspotting, Brian Robertons, the guitarist for rock band Thin Lizzy and Gordon McIlwham who played rugby for Scotland.

The drama studio and theatre at the school is named after Macdonald, who was a pupil from 1987 – 93.

Eastwood was redeveloped in 2013 as part of £30 million revamp and a recent inspection of the school noted pupils were: “Articulate, well-mannered young people who are eager to learn and proud of their school.”

An spokeswoman for teachers’ union the Educational Institute of Scotland (EIS) said: “The EIS does not comment on specific incidents in individual schools.

“All schools have policies in place to deal with the wide range of discipline issues which can arise, and local authorities are required to ensure that sufficient resources are in place to allow schools to implement discipline policies and to respond appropriately to any incidents which occur during the school day.”